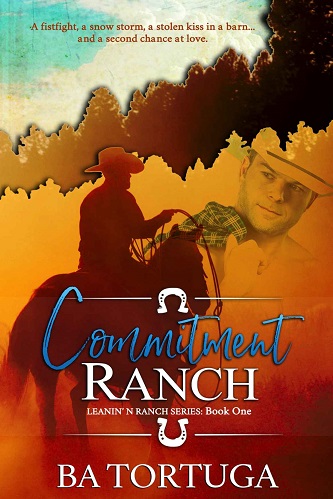 Blurb: Not everyone gets a second chance at love.

Ford Nixel has two law offices, two fancy condominiums, and all the right connections. He definitely thinks he has everything he wants.

The last thing he needs is his Uncle Ty’s stake in the Leanin’ N, a ranch that’s been in the family for generations. Ford hasn’t even been to the ranch in over a decade, not since he left his boyfriend Stoney behind and headed back to college alone.

Ford arrives at the Leaning N to find Stoney, now a single father, right where he left him. A fist fight, a snowstorm, and a stolen kiss in the barn later, and Ford knows none of the heat between them has dissipated, but can they make their second chance work?

Review: When Ford’s Uncle Ty asks for his help Ford doesn’t hesitate to rush back to the ranch he hasn’t set foot on in twelve years. Ford returns to the Leaning N not looking forward to seeing his ex-boyfriend Stoney, the man who preferred the ranch and knocked up Ford’s cousin. But even with twelve years and a child putting distance between them Ford’s feelings for Stoney haven’t changed and when Stoney reveals a secret Ford can’t fight how he truly feels for Stoney.

This is a great story that has two men reuniting and finally putting the misunderstandings between them to rest. Ford is a great character who is struggling with his resentment for Stoney, having to work with Stoney proves to be like getting blood from a stone, they clash, bitch at each other and Ford wants nothing more than go punch Stoney. Stoney is a solid character who doesn’t believe he is any good at anything other than being a cowboy, Stoney resents Ford coming home, and he resents Ty asking him to work with Ford but if the Leaning N is going to keep going he needs Fords help.

I really like how this story was written, while Ford and Stoney’s relationship plays out throughout the story we also have them learning to work together, moving forward to improve the ranch, we have Ford trying to find his place as the people who work on the ranch are like family and we also have some great characters who shine like Quartz (Stoney’s son) and Geoff (the vegan cook).

The story is easy to follow and is well paced; there are some hot moments between Ford and Stoney and some tense moments (snowstorm), the relationship doesn’t instantly strike up again when Ford and Stoney meet again in fact it takes quite some time before they are even in the same room without them wanting to punch each other. B.A. Tortuga has again written a story that produces some warm and fuzzy feelings and while it does have tension it isn’t angsty.

I recommend this to those who love second chance love stories, who adore characters who can put the past behind them for a new future, and great characters who are determined to get a happy ending.