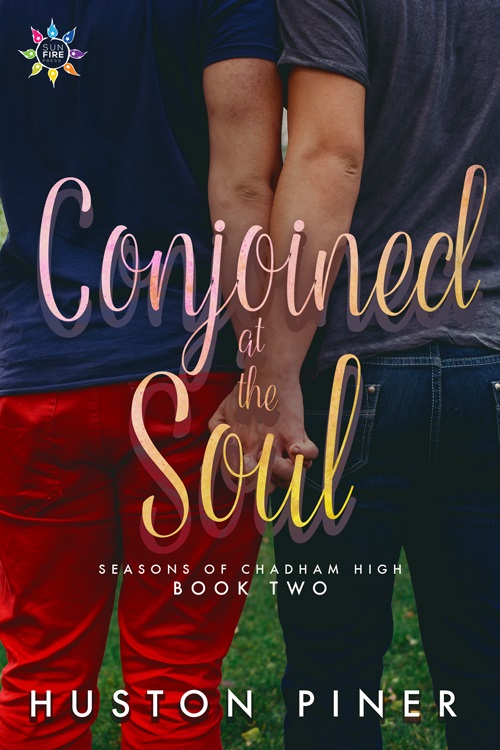 Conjoined at the Soul, Huston Piner © 2018, All Rights Reserved

Chapter One: Of Mirrors and Locker Rooms

Today is a day of historic importance. See, I woke up this morning and discovered I’m gay.

I was brushing my teeth, and when I spit out and looked in the mirror, a pointy-nosed, sixteen-year-old with unruly blond hair stared back at me and said, “You, young man, are gay.”

I know I know I know, it’s not quite that simple. I didn’t just go to bed last night as the straight Randy Clark only to have the gay pixie come and sprinkle fairy dust all over me in my sleep. The truth is, it’s something I’ve kind of seen coming for a couple of years now. It’s like a process: one day you start adding up all the times you’ve caught yourself looking at guys or couldn’t stop thinking about a particular boy, and it just hits you—you’re gay.

Luckily, I have the ride to school to think about it. When the bus stops, I check the time, and it’s running late…again. Three minutes late.

I hate being late.

My best friend, Blake, stumbles on board like a zombie. His head’s drooping, and his shoulders are slumped forward. Yup, it was obviously another late night for Blake Rogers.

I flash him my most saccharine smile and say “Good morning” with my most sarcastic cheeriness.

“Mumm-ning, Randy.” He yawns and is already dozing before his butt even hits the seat next to me. And with that, it’s guaranteed to be a quiet, peaceful ride the rest of the way.

It’s funny, but now that I’ve admitted I’m gay, I’m more at peace with myself than I’ve ever been in my whole life. It feels natural. But it’s kind of scary too. I mean, being gay isn’t exactly the kind of thing you can just announce to the world. Some people would instantly hate you and tell you so, while others would express their opinion with a few well-chosen punches—and I get more than my share of those already. It’s enough to make a guy a little nervous.

And then there’s the problem—the real problem. Something’s missing in my life—something important, something very important. See, a straight guy can look forward to the possibility of getting married, but what about me? Is there someone out there waiting for me? I mean, sure, friends are important in life, but they’re not enough. What I need is a boyfriend, my own special someone to turn me on and send me into sexual orbit. That’s what it’s all about, right?

Blake starts snoring. I elbow him in the side and shake my head. He grumbles, but at least he stops snoring. The guy sitting across the aisle from us snickers.

Blake may be my best friend, but he won’t be the first person I tell I’m gay. It’s not that he’d stop being my friend or anything, it’s just that it’s more urgent for me to find someone I can go to for advice about guys first. Blake likes girls way too much to be of any help on that issue.

For that job, I know exactly who I need: Annie Brock and Jeremy Smith. They’re in my art class. If there are any two people on earth who will be able to help me find a boyfriend, it’s Annie and Jeremy.

I’ve finally made it to fifth period after surviving a typically boring morning, and whatever it was they served for lunch. (They called it spaghetti, but I swear it was wiggling.)

Art. It’s my favorite class, and unlike some of my others, I’m very good at it. I’ve got artistic flair. Our teacher, Mrs. Pilt, is the stereotypical art teacher. She wears smocks of various patterns and colors, and they’re always stained with smears of paint.

The art room reeks of pottery clay, glue, and God knows what else. The walls are lined with shelves and paintings, and there are weird mobiles hanging like Picasso spiders from the ceiling. It’s always noisy, and the radio constantly blasts out the Bee Gees, Dire Straits, and The B-52’s, with a little Chic thrown in for good measure. There are a number of rectangular tables here and there with up to six people at each. Annie, Jeremy, and I sit at the table closest to Mrs. Pilt’s desk. We’re her favorite students.

The great thing about art class is, as long as you stay on task, Mrs. Pilt lets you chat with the people around you. At our table, Annie does most of the talking. I get in a few words every now and then, and Jeremy rarely speaks at all.

We’re starting a new project, and for the moment, even Annie’s quiet while we all consider the charcoal and paper before us. If I’m going to tell them I’m gay and enlist their help, now is my best chance. I’d better act fast.

I open my mouth, but suddenly a lump forms in my throat. I take a deep breath and try again, but my stomach flutters.

What’s wrong with me? Why am I so nervous all of a sudden? Maybe if I ease into the subject?

I clear my throat. “Did you see Andy Gibb on TV this weekend? He’s good-looking.” I manage to say it without stammering.

Annie pulls at a lock of wiry black hair and grunts out one of her peculiar snickers. “Honey, good-looking doesn’t even begin to describe Andy Gibb.”

Annie’s laugh is kind of a cross between a giggle and the sound some people make when they’re blowing their noses. Like Annie herself, it’s unique. She’s outspoken and outlandish, and she doesn’t care who knows it. And she’s definitely got more than her quota of artistic flair. It extends right down to the clothes she wears. For example, today she has on a tangerine and lime-colored disco party dress with three-inch-high clogs.

Without looking up, Jeremy says, “He’s okay. What other singers do you like, Randy?”

One of the nice things about Jeremy is he’s not only quiet, he gets along with everybody—except for that low-rumble, love-hate thing he and Annie have going on. It’s okay though, because in the three years I’ve known them, they always sit together, and they look out for each other, despite constantly bickering.

“Well, on the male side, I guess I’d have to say Rod Stewart. That Georgie song was just so moving.”

“The one about the gay guy?” Jeremy mumbles, and Annie starts to snicker.

So much for easing into the subject.

Annie freezes in mid-snort. Jeremy looks up without raising his head.

“Of course you’re gay, sugar,” Annie says with a chuckle. “But you don’t have to say it so loud.”

I quickly look around, my cheeks burning, but none of the other students are paying us any attention.

Annie’s smile softens. “Now, don’t be embarrassed. I just mean I’ve had my suspicions about you for a while. You dress too well, and you’re always combing your hair. And you even like the Village People.”

“So what? Lots of people like the Village People. What’s that got to do with anything?”

“It’s about hanging out with all the boys. You get it now?”

Jeremy slowly shakes his head and rolls his eyes. One thought on “Conjoined at the Soul by Huston Piner Release Blast, Excerpt & Giveaway!”