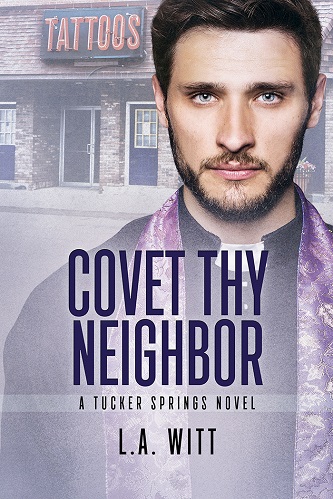 Blurb: Welcome to Tucker Springs, Colorado, where sparks fly when opposites attract—but are some obstacles too great to overcome?

When tattoo artist Seth Wheeler meets his new neighbor, it’s like a revelation. Darren Romero is everything Seth wants in a man: hot, clever, single, and interested. For a minute he seems perfect. Then Darren drops the bomb: he moved to Tucker Springs to be a pastor at the New Light Church.

As a gay man whose parents threw him out, Seth has a strict policy of keeping believers at arm’s length for self-preservation. But Darren’s perseverance and the chemistry bubbling between them steadily wear down his defenses.

In a small town like Tucker Springs, Seth can’t avoid Darren—or how much he wants him. Which means he needs to decide what’s more important: protecting himself, or his feelings for his neighbor.

Review: LA Witt is an author whose work I will grab regardless.  I have yet to read a book by this author that I did not like. Witt has a keen eye for details and possess the ability to transform the reader directly into her world. Likeable characters, realistic situations and some of the steamiest sex scenes I’ve ever read!

For those of you that read book 1 in this series, Where Nerves End, you will immediately recognize Seth. The openly gay, laid back tattoo artist hasn’t always had an easy life. Shunned by his fanatical family when he came out to them in college, he had to learn to make his own way in life quickly, when all communication and funding for college were abruptly cut off. He has a good life now with a good job, an apartment and a fantastic close-knit group of friends.

When sex on a stick Darren moves into the apartment across the hall, the animalistic attraction between the two is instantaneous. Darren wastes no time getting Seth into his bed. When Seth learns that Darren is minister, he immediately withdraws from him. The pain of his past hasn’t faded and he subconsciously groups Darren in the same class with his family. But, he can’t stop thinking about the minister with his dark hair and eyes and a dry, witty sense of humor that makes Seth laugh.

Seth tries very hard not to want Darren, but the fact that the two of them can’t be around each other for very long without ending up in bed doesn’t help his flimsy resistance. Unlike Seth, Darren knows exactly what he wants and what he wants is Seth. When Darren approaches the subject of taking their relationship beyond just the bedroom, Seth’s self preservation mode kicks in. Will the harsh words he says create a rift between the pair that can’t be undone? Or will Darren forgive the man he’s fallen in love with, the man that’s also fallen in love with him, but won’t admit it, not even to himself.

The story flows effortlessly and before I knew it I was at the end. The characters are both flawed and carry some pretty serious baggage, but this only makes them more believable and likeable in the end. The sex is sensual, steamy and well conveyed by the author. This is a must read for any M/M fans.