Hi guys! We have Jocelynn Drake & Rinda Elliott stopping by today with the tour for their new release Dantès Unglued, we have a brilliant gueat post, a great excerpt, a fantastic $25 Amazon giveaway and Shorty’s review, so check out the post and enter the giveaway! <3 ~Pixie~ 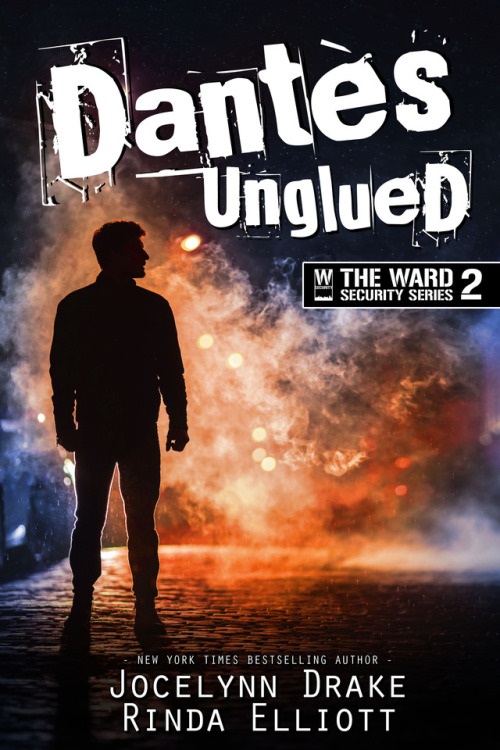 When private investigator, Shane Stephens, is hired by the mayor of Cincinnati to track down the hacker who has been threatening him, Shane is sure this is the opportunity to launch the Merleau Detection Agency into the big time. He even convinces Rowe Ward of Ward Security to loan him one of his best IT specialists, Quinn Lake.

Shane, a man who prefers casual intimacy, is surprised by his attraction to the moody computer geek, but when Quinn suggests they have fun for the month he’s on loan, Shane happily agrees. Both men are expecting nothing more than a good time.

But the investigation takes an unexpected turn and they quickly discover they are facing more than a hacker out to ruin the mayor’s re-election chances. And as they spend more time together, they realize their relationship may be a lot more than just a good time.

With only weeks until the election, Shane and Quinn race to gather the proof they need while dodging bullets and possibly…falling in love.

by Jocelynn Drake and Rinda Elliott

One of the most difficult things about self-publishing is finding the right images or art for your book covers. With NY publishers, you don’t get a lot of say in the final cover. You can ask for tweaks, things like that, but you’re usually stuck with what they envision.

With doing this ourselves, we can put our visions on the covers. Problem there is finding a good representation. Jocelynn and I work off character inspirations, real buildings, and homes—we even draw blueprints occasionally. With two authors writing the same places and characters, it’s a necessity. So we end up truly seeing those models who fit our characters in our heads. When it’s time to find a cover, nobody is good enough.

Plus, a lot of the good stock images are already on a lot of covers. I see our Ian everywhere and there is one stock model I wouldn’t mind not seeing again after he graced hundreds of covers.

So finding good cover art is a challenge.

We’ve been super lucky with our covers. One of Jocelynn’s brothers is a graphic artist. Design by Drake. I’m sure we drive him nuts though, because we will tell him a little about the book, then give him a bunch of images that could work for us. With Unbreakable Bonds, we knew the style of cover we wanted. I even drew a mockup to show him. And we knew we wanted a skyline of Cincinnati on every cover. Our setting plays a major part in all of our books. Jocelynn spent the majority of her life there and knows the neighborhoods unbelievably well. She has a knack of showing us how different areas feel—both good and bad. Every city has her shady areas, after all.

With Ward Security, we both liked this creepy image that worked for our villain, so we asked Stephen to give us a cover built around it. We considered going with a villain on each cover in the series after that, but realized that could end up being too spoilery. So now, we’re collecting images with a certain feel.

Dantès Unglued, book two in our Ward Security series, is heavy on the mystery element and we wanted the cover to reflect that. And this particular image fit perfectly for our opening scene, so we were thrilled when we got the final version. It is perfect. You can meet Quinn Lake and Shane Stephens in Dantès Unglued now. Hope you have a blast with their story! After one quick knock on Rowe’s door, he stepped inside without waiting for him to call since he was already expected. But he stopped short when he saw the tall man standing next to Rowe’s desk, his hands on his slender hips as he grinned down at Rowe. Quinn couldn’t stop his eyes from quickly sweeping over his broad shoulders and chest that tapered into a narrow waist. His eyes snapped back up to find a pair of brown eyes that twinkled as they finished checking him out as well.

“Sorry,” Quinn mumbled, instantly taking a step backward. “I can come back.” Rowe rarely saw clients. He had customer representatives that handled talking to the clients. Of course, with Rowe’s lack of a filter, it was better if he didn’t talk to the new clients directly.

“No, come in, Quinn,” Rowe said sharply. He stood behind his desk, drawing Quinn’s gaze to his shorter but broader frame. His dark red hair stood up slightly as if he’d been running his fingers through it. Quinn never took that as a particularly good sign.

With a quick jerk of his head, Quinn stepped in and shut the door behind him. The other man was smiling at him, that assessing look still in his eyes, and Quinn didn’t want to think about the fact that he was dying to take another longer look at him, but not with the freaking boss in the room.

Shane extended his hand to Quinn and Quinn clenched his teeth, trying to hide his discomfort at taking Shane’s hand. His own palms were sweaty, making the momentary contact awkward. Why the fuck was he always so damn awkward around hot guys?

Quinn couldn’t help the skeptical look he shot at Rowe, who only shrugged as he sat down again. “Well, I said you and Gidget are the best.”

“Sit, Quinn.” Rowe absently waved toward the two chairs in front of his desk. He shuffled some papers around without seeming to actually look at them, placing them in piles at the edge of his desk.

Shooting one last uncertain look at Shane, Quinn moved to the farthest chair and sat, his tablet clenched in both hands. His mind raced as he tried to figure out why he’d been called into this meeting. Clients didn’t meet with Rowe, and Quinn didn’t meet with clients unless they’d already been assigned a bodyguard. And while they’d worked with some private investigators in the past, Rowe wasn’t usually involved. He had a company to run.

“Shane recently acquired a client who is the victim of a hacker,” Rowe started.

Quinn looked up at Shane, who was still standing beside Rowe’s desk, his mind finally turning away from too many questions to a problem he could understand. “Identity theft? Bank accounts drained?”

“No, not yet.” Shane shook his head, some of his dark curly hair falling forward against his temple. “At least, not that we’ve uncovered.”

“Then how do you know this client was hacked?”

“There are other signs…but I can’t go into it.”

Quinn frowned for a second. That certainly wasn’t going to make his job easier. “Well, do you just need improved protection? Alerts on accounts? We’ve got a comprehensive list of things we can do to help shore up the client’s account protection and privacy.”

“Shane isn’t looking for protection from the hacker for the client.” Rowe paused until Quinn looked back at him. “His client has hired him to track down the identity of the hacker.”

“Whoa…” Quinn said on an exhale, sitting back in his chair. That…that was not an easy task. Most hackers were pretty damn good at not being found. You had to be if you wanted to survive as one. If you sucked, you were usually snagged by the FBI pretty damn fast. Quinn would know. He’d started hacking at a young age—not stealing other people’s money but just breaking through security systems because he could. It took the feds a solid five years to catch him. But his boss knew all this. Rowe knew everything about the people working for him.

“We’re not equipped to handle this level of…” Shane frowned at Rowe’s computer as if he blamed it for his problems. “Well, we’re not staffed yet to handle computer things like this. I can do some of the forensic research in accounting matters, but I need a computer genius like you.”

“That’s why I agreed to loan you to Shane and his business partner, Ethan, for one month,” Rowe announced.

Quinn was out of his seat in a shot, hovering over the edge of the desk as he looked down at his boss. Pain shot through his chest, and he was suddenly having trouble catching his breath. Panic clouded all of his thoughts. He loved working for Ward Security. He’d been there for just less than two years, and he’d never found another place where he’d felt like he fit so damn perfectly. This was home. These people he worked with, they were his friends. He didn’t have to hide or pretend or feel uncomfortable.

And Rowe…Rowe had always been amazing. Sure, he could be cranky and a little crazy. He was always loud and tended to speak before thinking. But Quinn always knew exactly where he stood with Rowe. He always felt like Rowe had his back.

“Are you getting rid of me?”

“What?” Rowe snapped. “Where the fuck did you get that idea?”

“You’re hiring another IT person. I saw the listing. And this? Putting me ‘on loan’?”

Rowe groaned and scrubbed a hand over his face. With a heavy sigh, he pointed back at the chair Quinn had just vacated. “Sit.” Grudgingly, Quinn followed direction while Rowe looked over at Shane. “Can you give us a minute?” 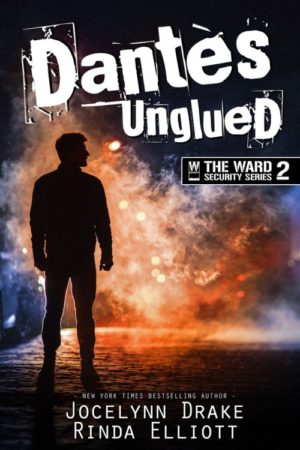 Blurb: When private investigator, Shane Stephens, is hired by the mayor of Cincinnati to track down the hacker who has been threatening him, Shane is sure this is the opportunity to launch the Merleau Detection Agency into the big time. He even convinces Rowe Ward of Ward Security to loan him one of his best IT specialists, Quinn Lake.

Shane, a man who prefers casual intimacy, is surprised by his attraction to the moody computer geek, but when Quinn suggests they have fun for the month he’s on loan, Shane happily agrees. Both men are expecting nothing more than a good time.

But the investigation takes an unexpected turn and they quickly discover they are facing more than a hacker out to ruin the mayor’s re-election chances. And as they spend more time together, they realize their relationship may be a lot more than just a good time.

With only weeks until the election, Shane and Quinn race to gather the proof they need while dodging bullets and possibly…falling in love..

Review: I really liked this story about Quinn and Shane. The two fit each other perfectly. It was by no means an easy relationship when you both agree to only sex and it turns into more. But they managed and all the sex was hot.

The case was way more interesting to me than the relationship. It was very hush, hush. Even Shane’s partner did not know the details. A game of who the hacker is quickly leads to deception, murder and a secret so scandalous that it will ruin an influential man.

Danger, heart stopping action and romance all lead to a well written story. Though I personally would have liked a little more detail in the case itself rather than the relationship. Aside from that it was a great addition to the series.