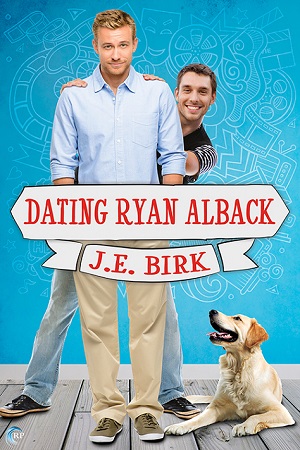 Blurb: Ryan Alback has almost everything he’s ever wanted: a successful acting career, a dog who adores him, great family and friends, and a life outside the closet. The only thing missing is a boyfriend — but Ryan’s been burned by Hollywood relationships before, and he’s not eager to try one again.

Jason Santos has almost everything he’s ever wanted: a fulfilling career teaching middle school, a house in a city he loves, and parents who support him in every way. Too bad he can’t seem to forget the ex-boyfriend who rejected his marriage proposal.

When a talk show host launches a dating contest to find Ryan a boyfriend and Jason accidentally wins, neither of them expect anything to come from it. Yet somewhere between a disastrous massage and a mud sinkhole, they both start to wonder if this date could be more than just a public relations stunt. But before they can move into the future, they’ll both have to learn to let go of the past.

Review: First time reading from this author, and I got to say that it’s an enjoyable story.

Ryan is an actor and a very private person, he was hurt badly by his last boyfriend, who only wanted to use him for his own gain, so he doesn’t date, he also has serious trust issues where people are concern. Other than his family and the Dog that he rescued, those are the only ones that he gives his trust to. When his agent roped him into appearing on a talk show, he got a shock, when he found out that he would be set up with a blind date for Valentines.

Jason, a middle school teacher, wasn’t too keen to go on this blind date, that his best friend signed him up for, when he was announced the winner. Jason was in a committed relationship for years, but he’s now single, but his priorities, are to get his nonprofit fund up and running. He agrees to the weekend date, but with the mistrust and the press hounding his every move, Ryan accused Jason of selling him out to gain publicity, and Jason leaves and goes home.

After a conversation with his best friend, Ryan was told that there’s no way that Jason would’ve talked to the sleazy magazine, that there wasn’t any profit in it for him. On his way to visit his family, Ryan stops to visit Jason and to apologize. They start to date and to work out the issues that they had, and to take on anything that comes at them in the future, even Jason’s ex that comes back claiming that he made a mistake and wants to reconnect with him.

I enjoyed this story and would recommend to anyone interested