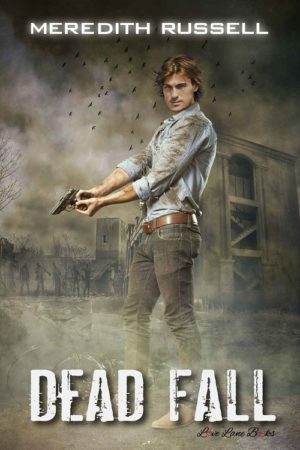 Blurb: Since the events in Chicago, Devin and Noah dare to believe that a future is possible, and there is hope. For them and humanity.

Noah struggles to find his place at Devin’s side. Stricken with survivor’s guilt and a driving need to make a difference, Noah leaves his lover to investigate the only lead he has to stop the undead. Himself.

Devin has fought to stay sane in a world of horror for too long and his one shining light is Noah. When Noah heads off on some misguided venture to search for answers, Devin knows he can’t bear to be the one left behind again.

They are two men who have nothing, and everything, to lose.

Review: Dead Fall picks up less than two months after Dead Things so the stories must be read in order.

While Devin has settled back into life at the prison he’s still keeping his distance from Noah, he might have decided to give Noah a chance but letting go of the past is hard. Noah is still struggling with what his immunity could mean for so many people but life goes on with him unable to really help. Trying to fit in and find his place is not easy but at least he has Devin, well the little that the man gives him.

When news reaches them of Chicago the survivors at the prison become restless, and with Corden gone his little followers can only think about themselves and what they can get. With the prison in turmoil Noah thinks there’s only one place he can get answers, and to save the others he heads off alone.

This is a great addition to the Dead Things series. The story moves along at a fast pace, with lots of things going downhill. Devin is trying to help Jack keep control as there is a murmuring of trouble from those who had Corden’s favour, but that’s the least of their problems when they hear what has happened in Chicago. When Noah tears off trying to find a reason behind the cure Devin quickly follows refusing to let the one man who means so much to him go. But what they return to shocks them to the core.

We met new people in Dead Fall, new people who might know more about the outbreak than anyone knew. Noah heads face first into danger with Devin following very close behind. This story follows the in same vein as Dead Things with some pretty gruesome scenes with lots of blood… lots and lots of blood. We also discover that sometimes we readers wish we could be one of the characters because at one point I wanted to grab a gun and march some selfish gits out the prison and feed them to the zombies *grrrrr*

We find that without a strong manipulative personality in charge that some of the survivors are really just out for themselves and couldn’t give a damn about the others. Seriously there was one point my jaw dropped and I could only shake my head in disbelief at the selfish evil actions of some people.

Devin and Noah’s relationship progresses a tiny bit, just always remember that this series isn’t so much about romance but about surviving and discovering something special from the ashes. Their relationship is being developed in a time of hell, with zombies, disgruntled survivors and a military/scientist group who have been looking for someone like Noah for a long time.

I recommend this to those who love grisly zombie apocalypse, a hint at the truth, facing danger at every turn and still a hint of hope for the future.