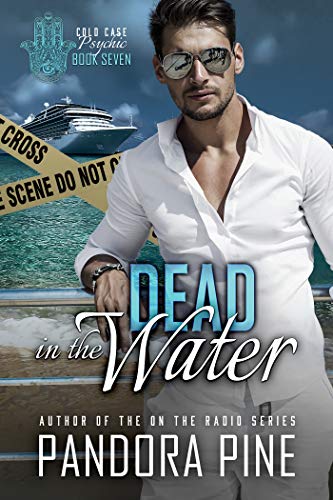 Title: Dead in the Water

Blurb: Cold Case Detective, Ronan O’Mara, has set sail on the honeymoon of his dreams to sunny Bermuda. He’s looking forward to a week of fun in the sun with his husband, Tennyson, but nothing is going as planned. From a fight between Truman and Carson that’s threatening to break up their marriage, to Captain Fitzgibbon’s on-again, off-again lover not showing up to meet the ship, to dealing with his always challenging mother-in-law, to frenemy, Jude Byrne, showing up with a suitcase loaded with sex toys and lube, Ronan has all he can do to stay sane.

Psychic, Tennyson Grimm, is on the ship to work as well as honeymoon. The cruise ship line has hired him to be the “celebrity” on their celebrity cruise. In between private and group readings reuniting family members with those who have crossed over, Ten is running himself ragged attempting to put the pieces of Truman and Carson’s marriage back together and trying to keep Jude from horn-dogging after the ship’s captain, all while trying to squeeze in a few stolen, passionate moments with his husband. He isn’t having much luck.

Putting the clues together, the Boston detectives corner the cagey killer who takes someone close to them hostage. Can Tennyson and Ronan save the day before they end up dead in the water?.

Review: Ronan and Tennyson are all set for their honeymoon and the whole gang is going. As with most plans things do not go as smooth as they liked to. Problems and miscommunication arise between certain characters that cause tensions as they set sail on a cruise.

I loved how the story was written and showed the struggles that of the characters involved. There is a mystery to solve near the end but most of the book centered around how the characters handled their issues with one another and showed how at times that all was not lost.

Another interesting instalment of the series as the reader tags along for an emotional cruise with the whole crew.