Hiya peeps! We have Victoria Sue stopping by today with her new release Dead of Knight, we have a great excerpt and a brilliant $5 Amazon GC or a backlist title giveaway, so check out the post and don’t forget to leave a comment to enter the giveaway! ❤️ ~Pixie~ 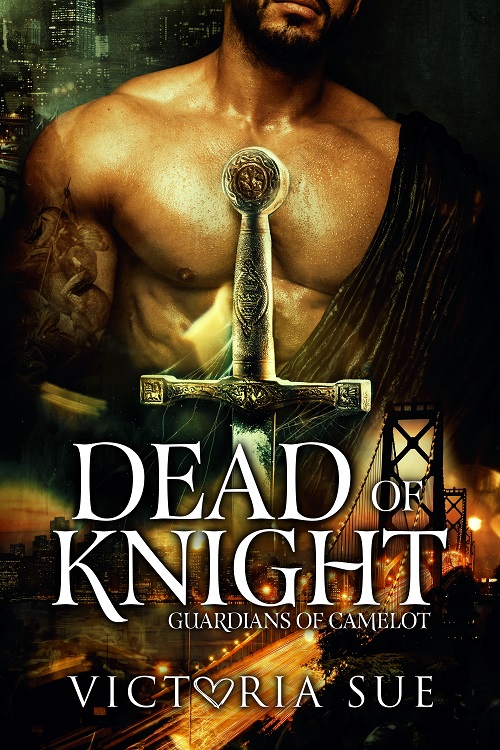 (Guardians of Camelot 02)
by

A battle is coming…

Two years. And what seemed like every second of every day Lucan had tried to protect Tom. He wavered between needing to be in close proximity to see he was safe, and sometimes more desperately needing to be far away.

“I can’t decide if the lack of an enemy for you tonight is better or worse.”

Lucan glanced at Kay as he watched Ali gathering up wrapping paper. “Worse,” Lucan insisted. It had been weeks since the standoff with the Ursus, Elaine’s death if she had really been alive, and Morgan’s foiled attempt to be reborn in this world, to ensure her body became a tangible presence, even if her evil had always been so. What had seemed such a blessing for days after that to give themselves a chance to recover was now more unsettling every day. Their amulets had given them warnings often night after night, and they had rushed to the fight only to encounter nothing, as if the Ursus had disappeared. They had all assumed they would patrol later, but Mel had threatened bodily harm if they had not been here to see Tom open his gifts.

And no one took any of Mel’s threats lightly.

“And it isn’t that we lack for an enemy, it’s just we cannot see a target.”

Lucan tuned out whatever else Lance said as Tom had picked up a small box that Lucan had wrapped himself no more than an hour ago. He had spent hours fashioning the wooden figure, and he hoped with every beat of his pounding heart that Tom liked it. He had a moment of panic when he realized he hadn’t enclosed a card. There was nothing in the box to tell Tom who had gifted it. He watched intently as Tom unwrapped the box and lifted the lid. He saw Tom’s face register surprise and as his lips curled upward in a smile, pleasure as well. Lucan let out a barely audible breath, unsure if he should admit the gift was from him. Maybe Tom would ask? But then Lucan watched as Tom carefully lifted the small figure of the knight resplendent in full armor brandishing the sword and held it up.

His gaze pinned Lucan’s. “Thank you.” The words were whispered, but just as Kay had teased him a few minutes ago, Lucan felt them echo around the room. He could almost feel himself reaching out, his hands clasping them and drawing them close. Like they were a living thing for him to keep safe just as the person who had uttered them.

Lucan pushed himself away from the door as if his limbs moved unbidden, and Tom’s eyes widened in anticipation almost. Lucan’s heart thudded in response. They needed to be—

For an interminable, desperate minute, Tom held Lucan’s heart in his hands. Lucan wrenched his gaze away. He mustn’t forget. Tom was his to protect, and that was it. Despite every cell in his body screaming its protest, he needed to stay away. Tom would have a life, and nothing and no one would stop that happening.

Especially as he was a destroyer of lives, not a savior.

For an instant Lucan wondered if he conjured up the thing he wanted most.

“Thank you.” Tom held the small figure in his hand, standing so close.

Lucan’s lips parted to say that it was nothing. That it didn’t mean anything. That it had taken him no time at all, but he would’ve been lying. He knew it—Tom certainly knew it. “You’re welcome.” He didn’t know what else to say. No, that was a lie as well. “I love you” would be a good start. “I’m obsessed with you” might have been closer to the truth. “I can’t live—don’t want to live—without you” would also have been near the mark. But of course, Lucan didn’t say any of that because Tom’s life, Tom’s living, was way more important than his, and he mustn’t ever forget that. Tom smiled, almost as if Lucan had. Tom glanced at the figure in his hand, then the floor, and then he raised his face to Lucan and took a breath, as if he needed the courage.

Lucan knew Tom wasn’t being funny. It wasn’t some sick attempt at humor. They both knew what he meant. They both knew Tom was Lucan’s Tresor. They both knew that today Lucan had run out of time to avoid what he knew must happen. Lucan knew every knight in the room had heard the quiet words. Lucan wasn’t surprised Tom had felt he could take no more two years ago, and Lucan had nearly been too late. Another second, another six inches farther away, and Lucan would have never been able to save Tom. The thought that Tom’s death would cause his own had never even entered his head. Tom would’ve died, and Lucan could not ever take the risk that he might be too late again. The knight must be intimate with the Tresor. Everyone knew Merlin’s instructions. The bonding and then the immortality could only happen in that way, and for two years Lucan had prayed for an alternative, but he had just run out of time. Tom’s “differences” were too risky, and the thought Lucan would leave him unprotected made him sick to his very soul. Win a $5 Amazon GC or an ebook from Victoria Sue’s backlist!