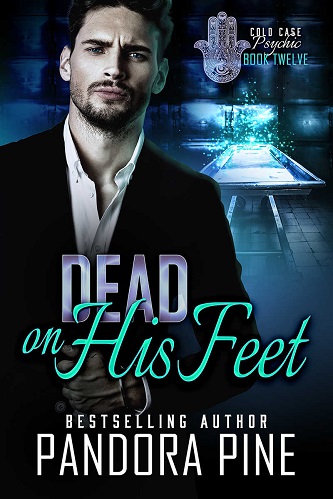 Title: Dead on his Feet

Blurb: Cold Case Sergeant Ronan O’Mara wakes to a shocking midnight phone call. The body of a man killed in a shoot-out with the F.B.I. has vanished from the Suffolk County Morgue. What’s even more shocking than the missing corpse, is the identity of the second man apprehended at the scene. Mitchell Bond, aka, Tommy O’Neil was Ronan’s second-grade classmate and best friend until he was kidnapped in broad daylight, steps from his front door.

Even though psychic Tennyson Grimm hadn’t heard of Ronan’s childhood friend before now, he’s suddenly consumed by thoughts of the man. Thanks to Ten’s gift he knows twelve missing children linked to Mitchell Bond are alive, but he is uncertain of where to find them.

When Ronan is finally given the opportunity to speak to his long-lost friend, accusations begin to fly. Ronan is blindsided and begins to question everything he knew about Tommy, his kidnapping, and whether or not he could possibly have played a role in it.

While Tennyson races to put the pieces together to save the missing children, Ronan is forced to come to terms with a past he thought was long dead and buried. Can he set aside his own emotions long enough to put a stop to this deadly hunt?

Review: An engaging story about missing children, a best friend who is mysterious and of course Ronan and Ten. I liked the way the story evolved and flowed as the two men tried to figure out what was going on and what happened to the children.

The rest of Ronan and ten’s friends make brief appearances throughout. I enjoyed the story and all the elements that made it a satisfying book to read in the series. Mystery, suspense, drama and romance all played a part in bringing this story to a good end.