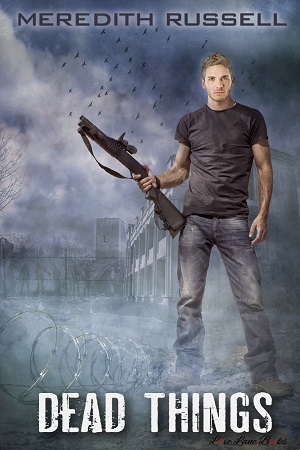 Blurb: Devin thought fighting a war in Afghanistan had shown him the worst kind of horrors.

It turned out he was wrong.

A deadly virus has infected the world population, leaving only a few survivors and creating monsters. Devin is part of a group who have found refuge in a secure place. He risks his life daily to scavenge the cities and highways for food and supplies.

On one fateful venture, Devin finds a man with the potential to change the dark future of blood and heartbreak into one of hope and second chances.

Review: Devin is part of a small group of survivors living in a prison after a deadly virus outbreak. On a scavenging trip, Devin comes across another survivor, Noah, who has managed to survive living out in the open, who the zombie bites doesn’t infect, and who could just be humanities savior. But the journey to survival is harsh, with blood, loss of life and an egomaniac leading the way. Will there be a future for any of them?

This is a very grim and bloody zombie story, which has a glimmer of hope and maybe developing new relationships after you have lost your whole world. Devin nearly lost everything when the virus struck, but with himself and his sister safe in one of the only safe places in the country, he at least has life. But, when he comes across another survivor he is made to face the fact that although he has life…he is not living. Noah lost everything when the virus struck, he has survived by himself since those first bloody days and now he has been dragged to ‘safety’ where they inject him and want his blood. The only one he trusts is Devin, but Devin holds him away at arm’s length. Can Noah crack the shell that Devin has built around him?

I really enjoyed this story as it has a slightly darker outlook on life, after a virus outbreak that turns the population into zombies. Both the characters of Devin and Noah are really well written, with both of them reacting differently to how the disaster has affected them. Devin draws into himself and continues on, because he has people relying on him. While Noah, grips life with both hands and tries to get as much joy as possible or it could just be that he is around humans who aren’t trying to eat him.

This isn’t a huge romantic, sex-filled story, far from it. It is a story of new hope and maybe new beginnings. It is a story of starting to lay old ghosts to rest and of a glimmer of happiness in the future. This story also isn’t for the faint hearted as it has some pretty gruesome scenes with lots of blood, some with characters we are just getting to know and we don’t get a hearts and flowers happy ending. What we get is the beginning of something that could be special, and a new hope for all humanity.

So, I am going to recommend this to those who love grisly zombie stories, finding the beginning of new love amid harrowing times, of an egomaniac who just hasn’t got a clue and of hope for the future.