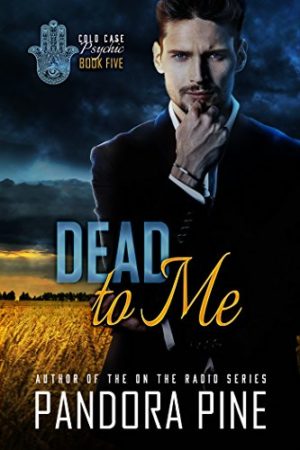 Title: Dead to Me

Blurb: Psychic, Tennyson Grimm, was kicked out of his house and disowned by his religious parents when he came out to them as gay and psychic. The last thing Tennyson’s father said before the teenager boarded a Greyhound bus to Boston was that his son was dead to him. Flash forward thirteen years later, Tennyson couldn’t have been more surprised when he woke to find the newly dead spirit of his father sitting on the end of his bed. David Grimm had one request of his estranged son. Go to Kansas and reunite with his mother.

Cold Case Detective, Ronan O’Mara, was all for this family reunion. Still recovering from injuries suffered during his last criminal investigation, he figures they’ll fly to Kansas, bury Tennyson’s father, and the hatchet with Kaye Grimm, then come back to Boston in time to plan their upcoming wedding.

When the Union Chapel Sheriff comes to Tennyson and Ronan with a years old cold case he’d like them to look into, the Boston-based duo can’t turn down taking a peek at the case file. Tennyson is easily able to figure out whodunit, but the sheriff is leery to believe in his gift, bringing old prejudices back to life, and leaving Ronan to hunt for physical evidence the killer left behind.

Will Ronan be able to solve the cold case and help Tennyson resolve the decade old feud with his mother? Or will the tornado, with its sights set on the tiny town of Union Chapel, Kansas, make the other questions moot?

Review: Having to rehash old hurts done to him by his family leaves Ten on edge but he has to go to bury his father after his ghost visits him. Having to deal with his mothers bigoted ways takes a toll on Ten but with his friends and Ronan their to shelter him they teach his om that maybe she should change her ways. While this part is interesting I loved the mystery better.

While there Ten and Ronan are asked to look into a case. The details of the mystery are intense as the story progresses and we are given a glimpses of who the suspect is throughout. I loved how well the team works together to bring the suspect to light as they find clues that point in the right direction for the sheriff.

All in all it was a great read with an edge of your seat feel to it.