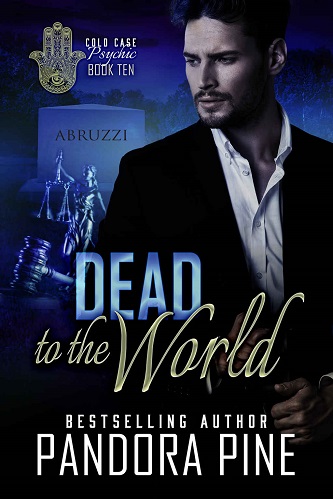 Title: Dead to the World

Blurb: Since the death of his former partner, Tony Abruzzi, at the hands of mob boss, Vito “The Dragon” Dragonni, Cold Case Detective, Ronan O’Mara, has been a shell of his former self. Other than working his shifts at the police station, Ronan is going through the motions of life. The once vital and active cop is reduced to binge-watching trashy shows on Netflix to cope with his loss.

Psychic, Tennyson Grimm, has a secret he’s been forced by the FBI to keep: Tony Abruzzi is alive. Barely eating or sleeping as he tries to cope with the guilt of keeping the truth from Ronan, Tennyson knows it’s only a matter of time before his friends stop buying the lies he’s telling to explain his restless nights.

When Tony appears to testify at Vito Dragonni’s trial, all hell breaks loose. Accusations fly about who knew Abruzzi was alive and why it was kept a secret from Ronan, who’s been struggling to come to terms with the “death” of a man he considered a brother.

Focusing on keeping their loved ones safe and bringing Dragonni to justice for his crimes once and for all, one question remains: Will Ronan be able to forgive Tennyson for lying about Tony’s death?

Review: Both Ronan and Ten struggle with their emotions throughout this story. They both feel guilt and hopelessness at the situation. As the story progresses we see them pull together and be there for the other in their time of need as well as seeing the other characters in the series make appearances.

It did not have quite the appeal as the other stories in the series to me but it was still an enjoyable read never the less. The final arrival of their bundle of joy was a bonus that added a happy note to the book.