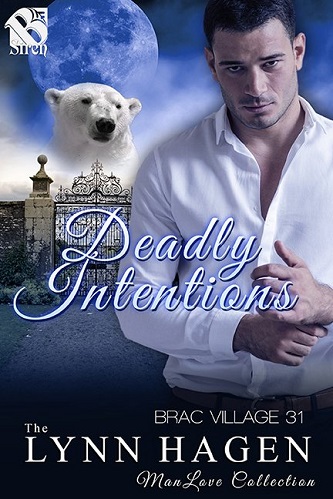 Blurb: When Francis’s boss calls asking him for a favor, Francis reluctantly goes to Callahan Covetti’s mansion to cut the guy’s hair. What Francis didn’t expect was to fall in lust with Cal. Not when Francis was still nursing a broken heart over his jerk ex-boyfriend. But when Cal shows up at Francis’s apartment, shot and needing a place to hide, Francis’s life takes a drastic turn, and he finds himself, and Cal, on the run.

Cal’s grandfather tried to raise a killer, but that wasn’t who Cal was. He wanted out of the family business, and tried to set up a meeting with some unsavory men to end their partnership, but getting out of that kind of life is never easy. Cal finds himself on the run with a bullet in him and nowhere to go. Although he didn’t want his mate to get involved, he goes to Francis for help. But they’re not alone in their struggle to survive, and soon Cal and Francis find out that they have to fight for the happiness they so desperately want together.

Review: Each book in the Brac Village. collection features a new romantic couple. To enjoy the overall story arc and crossover characters, I would recommend reading the series in sequential order. This series is a cut off from Brac Pack and I would suggest starting with that series first. It is also connected with several other series as well.

Francis owed Haven so he heads over to cut some guys hair and damn if the man was walking sin. To bad he was trying to get that asshat of an ex out of his head, the damn man dumped him the night before. Then the sexy as sin shows up at his house shot up, well he was in for a big surprise. Cal has been raised to run the business his grandfather had. To bad for the old fart, he had no interest running weapons. He just wanted to run the normal, every day, legal side of the business. When his normal hair stylist couldn’t make it, he couldn’t believe it when his mate walks in instead. He had no clue how to keep them both safe and just wait for the surprise to show up.

It pretty much followed a direct path as the other stories in this series had. Humor, ok lets face it they are funny as hell, danger, excitement, action packed and not to mention some hot sexy times are all rolled into this story. The characters are quite quirky and will definitely have your head in the clouds. The down side is it felt a little rushed to me. It was very entertaining as one would expect in Lynn Hagen’s books.

I had a blast reading this and can guarantee that it will be read many times over. I can’t wait to see what the next book has going on.