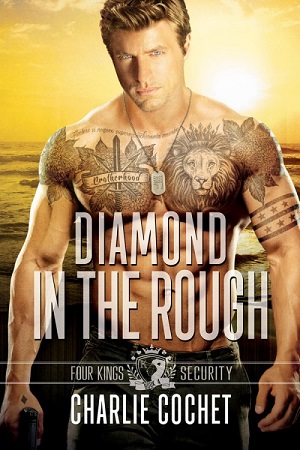 Title: Diamond in the Rough

Blurb: For Ward “King” Kingston the role of protector, forged by fire and tragedy, is one he takes seriously. When King is asked to safeguard the son of a four-star general and friend, he is pulled back into the world of government black ops on a mission that raises painful memories from his past. The moment King meets Leo, amid the chaos of a lockdown at a secret black site, it’s clear he’s never faced a challenge like this—one that will test his unwavering sense of control.

Leopold de Loughrey is a misunderstood genius whose anxiety and insecurities are sent into overdrive when he is forcefully recruited to work on a top-secret project. Terrified of what his role as invaluable asset means, Leo’s stress leads to disappearances, arguments, and blowups that threaten the project and Leo’s future. King’s arrival is a calm in the storm for Leo and his frenetic thoughts.

King and Leo couldn’t be more different, yet as they navigate the dangers of a secret multi-agency operation and face unknown threats, their differences could be what saves them. Neither man believes happy ever after is in the cards, but their hearts might just prove them wrong… if they can survive a deadly betrayal.

Review: Each book in the collection features a different romantic couple. To enjoy the overall story arc and crossover characters, I would recommend reading the series in sequential order.

King has always been the one the guys, his brothers, depended on. He had felt guilty for an op gone wrong and felt like he was not what everyone thought he was, a hero. When an old friend and General asked him to protect an asset he had not expected that asset to be the general’s son.

Leo is smarter than pretty much anyone and everyone. His father had hid him away from the government and tried to keep him safe. Then Leo made a mistake and now the government wanted him to work for them on one project, but he knows what will happen in the end. His father sent King to protect him. The thing is, Leo is unlike so many others that only King can understand him.

I was waiting for King’s story and sure do hope this is not the last book. It is fascinating and entertaining with quite a bit of danger added in. I enjoyed the surprise twists that come with the story and definitely had a jolt when I figured out the bad guys. This story caught my attention and I just couldn’t put the book down. This is one of those stories that will be read many times over.

I had a blast reading this and can’t wait for this author’s next book to come out. There are two more sexy men in the group that need their stories told,. I loved the guys and their stories quite a bit and would definitely recommend it.