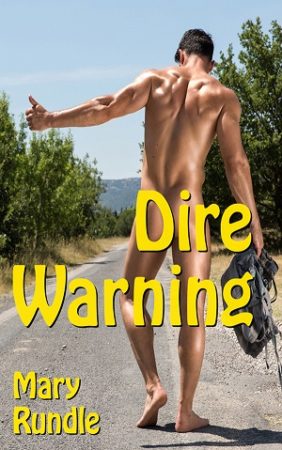 Blurb: Steel, one of the last Dire Wolves on earth, has searched more than 100 years for the special mate promised by the Fates. Discouraged after meeting his latest prospect, he sees a naked hitchhiker on his way home who’s everything he’d envisioned the man of his dreams would be. His wolf and body tell him he’s found his fated mate but why can’t he pick up his scent?

Robbed of his car, clothes and money, Jackson, Alpha of the Blackwood Pack has no choice but to thumb a lift, frantic to get home to his six brothers. He’s been protecting them from a rival pack who massacred most of his family and wants to finish off the rest. When Steel rolls down his window, Jackson knows he also has found his fated mate but it would be too dangerous to claim him with his pack under attack.

After the intervention of an Oracle and a Witch, Jackson discovers why the Fates made him unique-just for Steel. Navigating the mine field this revelation brings, Jackson and Steel must figure out how to make their relationship work while dealing with forces determined to kill the Blackwood pack – and them.

Jackson and his brothers were the only survivors of their pack. They were special wolves and really had no clue. Jackson was the oldest which made him the alpha but he sure didn’t act like one. Which explained how he ended up hitchhiking buttass naked. What he had not expected was the man who picked him up, his mate.

Steel was an alpha wolf but he was also one of the four last dire wolves. His mother was the voice of fate and had told him something no male wolf would ever believe. That his mate would be the one to have his child.

Too bad the ones who killed Steel’s pack, wanted the rest of them dead. It is going to take a miracle in more ways then one. Now with this pack it is very long winded and goes off on things that were not really needed. So much so that it was harder to get into the story and even harder to finish the book. The characters were somewhat weird and didn’t really connect at all with them. There is great potential in this story but for me it was just overblown with a lot of added in stuff that could have been left out.

The story is unique and fresh with the idea of white wolves that are not just alpha but also omega. I did enjoy the fact that they could get pregnant but wished that the story was not dropped right in the middle. I don’t care for books that don’t have closure with each book and cliff hangers are not my idea of fun. Most times it makes me leave the book and drop the series, but I will make my decision on the next book.

Over all the story is a good read.

I really wanted to love this story of an Alpha whose pack and family were attacked and massacred while him and his brothers are away at college. This story start of well as we see Steele and Jackson meet to discover they are fated mates. The intensity between these two was off the charts.

The want and need to discover the culprits of the massacre and to get back what was theirs was interesting. The huge cast of characters was a lot to take in all at once but they were important to understand how everything began. However, the many POV’s, inner dialogue’s and the overabundance of sex scenes, not to mention talking about them made me seriously speed read the book.

I am not a fan of more sex in a book when there is no need for it.

I feel it would have much better if some of the sex had been cut out and inner dialogue’s slimmed.