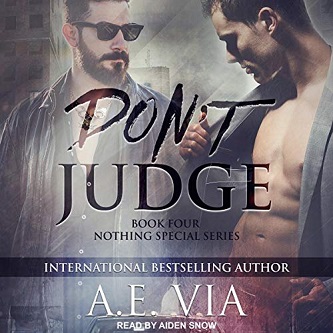 Blurb: Detective Austin Michaels didn’t think life could get any better after he was accepted into the most notorious narcotics task force on the East Coast, headed up by two of the baddest Lieu-tenants with the Atlanta Police Department – Cashel Godfrey and Leonidis Day.

Michaels knew he would fit right in as the team’s sniper, having received his fair share of com-mendations for marksmanship. He was just as badass as the rest of the twenty brothers that made up their team. But when Michaels lets their prime suspect get away from a huge bust with over a quarter of a million dollars in drugs, he’s willing to do whatever it takes to make it right.

Left with no other options, God chooses to bring in outside help, calling on his long-time friend and bounty hunter, Judge Josephson.

Judge was considered one of the best trackers during his enlistment in the United States Ma-rine Corps. After retiring, he used those skills to become one of the most sought out fugitive trackers in the country. When Judge gets a call from his old friend needing his help, he quickly tells God, yes.

Review: Don’t Judge is the fourth book in A.E. Via’s Nothing Special series. It is important to read these books in order, there is a whole cast of strong secondary characters who have already had their romance story told and so it would be rather confusing to jump straight in at book 4.

I really only know A.E. Via’s work from this series, which I have loved. To be perfectly honest I am actually kind of surprised at how much I got into this series. However, there is so much going on, so much depth to each character and so much plot and character development. This is an action filled series with off the charts steamy sex scenes that can satisfy all the reader’s needs.

And being that this is the audio, we once again have Aiden Snow, who has done the narration on the previous books, working his magic at bringing the characters to life. He has the perfect tone and timbre that suits the rough and tough world of a police narcotics squad, as well as an equally rough bounty hunter. Absolutely love his narration and cannot think of any criticism.

Onto the story itself:

The main characters of this instalment of Nothing Special series is Detective Austin Michaels and bounty hunter Judge Josephson.

Austin got the job of a lifetime, in the equally revered and feared Atlanta PD narcotics squad run by Lieutenants Leonides Day and Cashel Godfrey (who also happen to be life partners, their story kicks off the series in book 1). Another plus is that because there are a number of gay men, a number of whom have lovers within the team, Austin is proud to serve in the most accepting and diverse group in Atlanta PD. Even if they do get stares and whispers from others who are less tolerant. However, you cannot argue with results.

Austin is a sniper and like his team mates, is dedicated to making busts and bringing down some of the most dangerous drug lords in the city. However, when a bust goes wrong, Austin is not only injured but he also balmes himself for letting a very important man get away from them.
God and Day, although against Day’s better judgement, bring in God’s old buddy from the military, who is now a kickass bounty hunter, Judge Josephson (as well as his awesome dog, a Great Dane). Judge is hired to help bring in the man that they lost, and it is Austin who is paired up to go with Judge.

Judge and Austin don’t exactly hit it off straight away, in fact, they do not get along. Joseph is surly about the job as he realises that he doesn’t have too much time left in the bounty hunter game, as both he and his dog are getting too old to keep up. Austin is high strung because he blames himself for losing their man and therefore is the reason that Day and Knight brought in Judge. These guys are complicated, there is great sexual tension between them from the start. Yet, they have complicated personal lives that pop up during the course of the book and the job of chasing one man down does get a tad complicated – but not impossible with the help of the people of the Atlanta PD Narcotics team.

This was a great addition to the series. It’s full of danger and tension (both the sexual and dangerous kinds). If you love a gritty cop story, with great sexual chemistry, high danger and high adrenalin that will keep you going from beginning to end of the book, I recommend to give this whole series a try and not just this book.