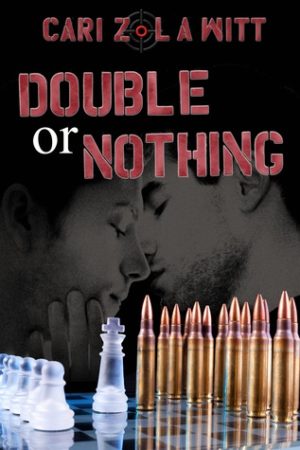 Title: Double or Nothing

Blurb: Rich Cody joined the U.S. Marshals to hunt down bad guys, not babysit witnesses. Orders are orders, though, and now he’s protecting a hacker with ties to the Albanian and Sicilian mobs. It’s just another exciting day in WITSEC.

Leotrim Nicolosi was born into a world of crime and bloodshed. When that bloodshed hits too close to home, taking down Leo’s boyfriend—the son of a notorious mob boss—Leo is determined to destroy the Grimaldi family. He’s got evidence that will send every last Grimaldi to prison, he’s got the family’s wealth in an electronic chokehold, and he’s got a vendetta that can only be settled with the blood of the man who killed his lover.

When a routine transfer to a safehouse goes horribly wrong, Rich and Leo narrowly escape with their lives. With the Marshals compromised and Leo being framed for murder, he and Rich are on the run from criminals and law enforcement alike. They have no one to trust except each other, and nowhere to go that their enemies can’t reach.

And the only way out might mean making a deal with the Devil.

Review: They are in a world of hurt. Rich joined the U.S. Marshals right after the marines. He had joined the marines to prove to everyone that he was a strong man, turns out he hadn’t needed to prove it to his father. Now he wanted to get the bad guys, but WITSEC was not what he had wanted. Now here he was going to protect someone who was definitely not innocent. He was part of the mob and new what bloodshed look like. However Rich had not expected the man to be who he was.

Leo had been born into the family. A half-breed who wasn’t treated like an enforcer should be, but then again being gay in the mob is a death sentence. Which is how he got to be in the spot he is in. Matteo had killed his own brother on the say so of their father because Tony and Leo had not been so careful. The only reason he made it out of there alive was for his boyfriends sister. Now on the run he didn’t know who to trust, except for the marshall that was in the same kind of trouble as he was. The mob wanted him dead and it would seem so did some of the good guys.

I have not read any stories by this author and lets just face it she is the bomb. Talk about an action packed story that has some hot sexy time mixed in with it. There is explosions, gun shots, death and destruction going on all around them. It is a longer story than what I had expected, but damn if the story didn’t just keep me captivated with it all. Which was a nice surprise after reading some really horrible stories lately. I absolutely loved the guys and damn if they are not in for a world of pain.

I only had one issue with this book and that was the ending. I didn’t see anything that made me think this would go into book two and left me hanging at the end. I wanted to know what happened and wham it just stopped. It was well written and the plot rocked. This is one of the best suspense stories I have came across in a while and I do hope there is a second book in the works.

I had a lot of fun reading this and would definitely recommend it.