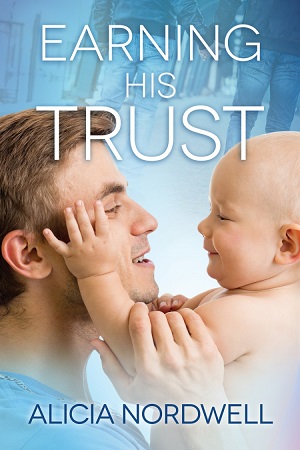 Blurb: Evin lost the only two men he ever loved. But he might get a second chance with one of them—if he’s willing to take the risk.

Following the death of his husband, Evin is living in Portland and raising the infant son they had through a surrogate. Six-month-old Micah is his life, and if it means no time for activities or friendships beyond his minuscule support network, that’s a sacrifice Evin is willing to make. When he suffers a burn baking teething biscuits, the last person Evin expects to encounter in the ER is Ben, his lover from college—and the man who left him without a word of explanation.

Ben knows it won’t be easy to earn Evin’s trust and prove he’s not the same man Evin once knew, but he can’t bear to watch Evin struggle to care for Micah, hurting and alone. He wants back in Evin’s life, as a friend and hopefully more, but Evin’s heart is fragile, and the years have changed him too.

Review: Ben and Evin had been a couple in love back in college, until Ben dumped him. No true reason or why but it hurt the same. Then Evin met Daniel and life had been looking up. They got a house and were going to start a family, until Daniel was murdered. He had not known that they were having a baby. Now a year has past and guess who is back.

Ben knew he had hurt Evin, but he also knew that they had been too young. Ben was going to be a doctor and it was going to take time away from Evin. He knew what Evin was going through and was determined to make it all right.

This is one of those second chance romances with quite a bit of pain leading up to it. It was a story missing quite a bit to it. You are missing some pieces that would have made the story rock for me. We knew why Ben left Evin in the beginning but it would have been a bit better had there been some more information to it. Then there is Daniel’s death is just an after thought. You get bits and pieces to it, but no real idea. There was no heat in the story and no passion put into it. The characters were sweet but dull.

The story was good but also flat. It was just missing to much to make the story pop out there for me. It just made it hard to connect with it. I am not saying I didn’t enjoy it because I did, but it could have been better.