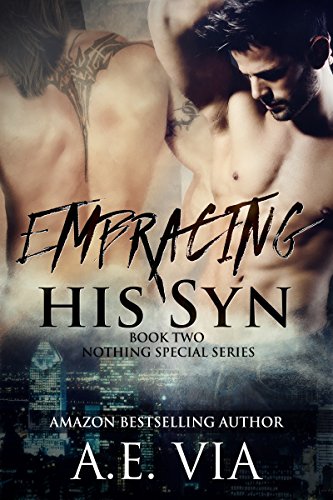 Blurb: Sergeant Corbin ‘Syn’ Sydney had dedicated his life to becoming the best detective. So when he heard there was an opening on the notorious Atlanta Narcotics Task Force, he jumped at the chance. But, what he wasn’t ready for was realizing just how lonely he’d made himself, when he observed the loving and dedicated relationship between the two men he served under: Lieutenant Cashel ‘God’ Godfrey and Lieutenant Leonidis Day.

Syn prepared himself to accept his lonely fate until he walked into a small pub and met the long-haired, tattooed bartender, Furious Barkley. Before Syn can even understand why, he’s overcome with feelings he barely recognizes: passion, yearning, craving. And if the dark, lustful gazes are anything to go by, Furious might be feeling the same things for him.

Just two things need to happen before Syn and Furi can give each other what’s been missing from their lives for so long… Syn needs to find the evidence that proves Furi’s innocence of murder, as well as protect him from a past that refuses to let go.

God, Day, Ronowski, and Johnson are still as entertaining as ever…

Disclaimer: The main characters of this book DO NOT participate in polygamous sexual pairings.

Review: Syn is the new Sergeant to the best Narcotics Task Force in Atlanta. Although at first he was not to sure about it, wait to you read to find out what the guys did. He is definitely one of a kind with an attitude. When he spots a sexy man he would like to get to know better, however the guy is giving him a good run.

The story has quite a bit of funny parts to it but there was a serious note to it in others. Also it had quite a bit of grammatical problems in the whole story that didn’t bother me as it should have but were still noticed. Furious comes off as an alpha but when it come to his ex, lets say more omega. He also was quite an ass to Syn which was just nuts. However the story just had to much in it that wasn’t needed.

I was glad to see that there was a bit more progress then what had been in book one, however it wasn’t enough to make the story rock. The main thing was the story felt a bit chunky but it was still a very good read.