Hiya guys, we have A.E. Via visiting today with her new release Ex Meridian, we have great excerpt, a brilliant giveaway where there’s 4 $25 Amazon GC’s up for grabs so check out the post and then enter the giveaway! ❤️ ~Pixie~ 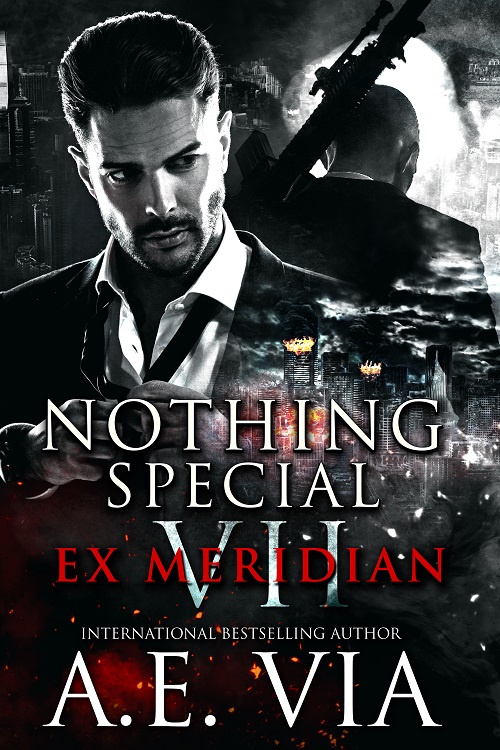 Police Lieutenants, God and Day are under intense pressure from the chief to take back control of Atlanta’s streets. The last thing their task force needs is a pair of trained killers in town with a personal score to settle.

Take a man and strip him of his ability to feel compassion, empathy, remorse, or any of the emotions that make him human, but leave the ones that ignite rage and aggression and you have the perfect killing machine—now imagine two of them.

Code names Ex and Meridian are synonymous for ‘guaranteed death’ to international terrorists. Two broken men from the same crooked streets, recruited into an unsanctioned government program that few know about. Trained to operate most efficiently—lethally—together.

When Ex returns from an op in Bolivia to learn his little brother has been accidentally killed in a feud between drug gangs, he’s stateside before he can consider the rules he’ll be breaking, and of course Meridian is right beside him. There’s mayhem on the streets of Atlanta and the police are losing control. If Godfrey and his elite team of detectives can’t get the job done then they’d be happy to lighten their caseloads for them. And Ex nor Meridian care about doing it quietly.

“I know who you are.” The man grunted when Ex turned to leave. “You’re the fucking devil.”

Meridian walked past, glaring one final time. “Say that loud enough… maybe God will save you.”

But after their first run-in with the big lieutenant and his protective husband, Day, Ex and Meridian start to reevaluate their own relationship. Wondering if they could be even deadlier if they let loose the feelings for each other that they’ve been forced to suppress for years.

Meridian’s dark eyes stayed locked on his, “A man who can fight beside the one he loves doesn’t make him weaker, Ex—it makes him more dangerous.”

No multiple pairings. No cliffhangers. Ends with a HEA.
Note: This is a partners-to-lovers, out-for-you, action romance. “Melinda. Why don’t you sit down and eat a little something? I’m sure you’ll feel much better than running yourself ragged,” one of them said, trying but failing to pull her friend away from the stove.

Why do other people think they know what’s best for someone else? Meridian didn’t shake his head as he stood inconspicuously in front of an eight-by-ten table beside the patio doors. He perused the ten to twelve different kinds of cakes and pies on offer. He picked up a small plate and put a piece of lemon cake on it and something that resembled a crumbly coffee cake.

“My kitchen does relax me,” Ex’s mother huffed. “Can you ladies just give me a second. Please.”

They stared at her for a long moment as she gazed down at the bubbling dish she was stirring, then warily eyed one another. With resigned sighs, both women retreated into the living room, whispering to each other as if Ex’s mom had gone deaf suddenly.

Meridian moved up close behind her. He reached around and set his plate on the counter in front of her. She tensed for a moment then spun around to meet his glare. He had no reaction to her fright or her gasp. Ex’s mother swallowed thickly, gripping the silver cross hanging around her neck.

“I’m sorry for the loss of your son,” Meridian spoke, his voice as low a timbre as he could get it, however Melinda still flinched.

“You knew Evan?” she asked, a slight frown creasing her smooth forehead. The only wrinkles on her face were the ones in the corners of her eyes and mouth.

“No. I’ve only heard stories of him.”

She tried to take a step back but she was as close as she could get to the stove without getting burned. “From who?”

Her lips immediately began to tremble and the other hand—not gripping the cross—flew to her mouth. She appeared to fight to take in air as she panted quick, short breaths. Watery, pale gray eyes stared at him, and he saw the second the realization settled in. Meridian knew that Evan had told his mother that her other son wasn’t dead but actually working deep undercover for the government, but she’d still likely never see him again. Meridian knew of the few clues and trinkets that Ex had sent his family over the years to let them know he hadn’t forgotten about them. He never told anyone that his partner was breaking one of their most important rules. But something about Ex and his family, something about what they’d gone through, was the reason he couldn’t sever all ties with his mom and baby brother. He simply wouldn’t, and that was something that intrigued him most about his partner—a piece of defiance that gave his extremely calculated existence some excitement.

“You knew Xavier?” she said, around a quiet sob.

Meridian shook his head. “No. I know Xavier.”

Her cries got a bit louder and Meridian started to get agitated. One, because he thought the dueling duo would flock back inside and stall him, but he also didn’t like to be around so much emotion.

“Where is he?” she asked in a harsh whisper as she reached out to clutch his arm but instinct had him sidestepping her touch before she could make contact. “My god.”

She didn’t budge and neither did he. Melinda looked as if she felt something might not be right, and narrowed her eyes. Meridian appreciated that she wasn’t an idiot, an easy target.

Melinda’s eyes widened—as though Meridian had passed her test—and she choked back more sobs as she scurried through a side door that Meridian realized was the pantry and grabbed her purse off a hook. She didn’t bother with cake, moving as if she was on a mission. He stood at the patio door waiting for her after she slung a black and gray shawl over her shoulders. Meridian slid the door to the side and eased them outside into the dreary, cold evening with no one else the wiser.