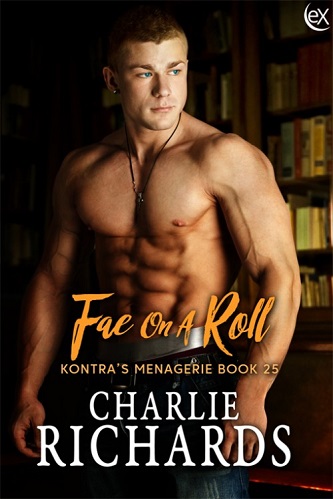 Title: Fae on a Roll

Blurb: On the Road: When a serious fae warrior stumbles across his soul-mate in a fun-loving, paralyzed human, he discovers the hardest task in his life is learning how to connect.

Prudhoe Rison is a specially trained fae enforcer and had been sent to the human realm to search for a missing prince. After completing that task, he should have returned home, but feeling a pull to stay, he’s remained for several weeks. Wandering the town to discover the source of the sensation has proven fruitless…until he drives past the library. The pull he’s been feeling intensifies, and he follows it into the building. There he meets Korvyn Peruke—his paramour—the other half of his soul. Prudhoe is drawn to Korvyn’s friendly disposition and outgoing personality. Even though the human is wheelchair-bound, it doesn’t stop Korvyn from enjoying life.

At first, Korvyn doesn’t understand why the serious and handsome Prudhoe is taking an interest in him—until he puts two and two together. A visit from a fae enforcer alerts Prudhoe that people in his own realm are talking about him. It also tells Korvyn—who already knows about paranormals—that Prudhoe is something other. Can Prudhoe keep Korvyn safe when trouble from the fae realm comes calling, or will he have to make the ultimate sacrifice to keep Korvyn safe?

Review: Each book in the Kontra’s Menagerie collection features a new romantic couple. To enjoy the overall story arc and crossover characters, I would recommend reading the series in sequential order. This story has branched off to several series and I would start with book one in the Wolves of Stone Ridge series.

Damn the fae are harsh. Old rule that their paramour can be any of the families and Prudhoe’s brother is an ass. When he came over to this realm to find his prince, he had not expected to come across his paramour. He also had not expected his brother to show up and try to abduct his man.

Korvyn, and I am glad to see him get his story, has always known about the paranormal world. When he had been younger he had been in an accident that left him paralyzed. However it also left him alone, most men were afraid that they were going to hurt him. So when Prudhoe started flirting with him and then getting just a bit possessive, yeah he knew what it meant. And damn if he wasn’t going to have a good time.

I love how Charlie Richards always adds in some pretty cool characters in her stories. Unique and fresh ideas plus a lot of hot sexy times are just a few things I get from these books. Add in a touch of mystery, lots of action and did I say some hot sexy times . The characters rock as always and I was glad Korvyn got his love story, he was always one of my favorites. I would have liked a bit more information on why Prudhoe’s brother hated him, but it wasn’t too hard to guess.

I had a blast reading this and can not wait to get my hands on the next book. I can tell you that this book is one of those that will be read more than once.