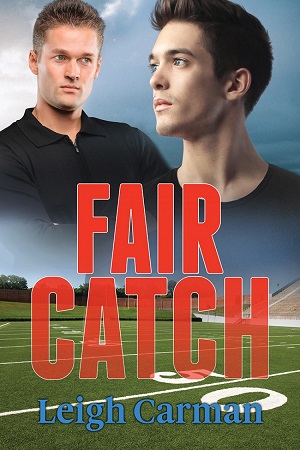 One night of passion.

They never expected to see each other again.

Tobias Bennett is a quiet and unassuming man who teaches yoga and enjoys parkour. Though he is proud to be gay, an abusive relationship with a domineering man has left Tobias wary of romance, and he keeps to himself in his tidy Los Angeles apartment.

Pro football player Sullivan Archer is Tobias’s complete opposite: loud, brash, fond of the spotlight… and deep in the closet. When a hamstring injury sends Van to Tobias as part of his therapy, neither of them is expecting to come face-to-face with his one-night stand. Now they’re stuck together throughout Van’s healing process, and the close proximity will force them to deal with some hard truths. For Tobias, it’s realizing his hookup is a celebrity. For Van, it means accepting that he likes Tobias more than he wanted. They’ll both have to acknowledge that if they choose to pursue a relationship, their lives will change in big ways.

Review: The Players of LA Series are standalones, but characters from each book to appear in subsequent novels. It is recommended to read in order to maximize the reading experience.

Sullivan was a pretty well known in sports. He however had one hell of a secret, he was gay. One night hookup with Toby left him wanting more. However he was afraid of what would happen if others found out. Then when he is injured on the field, part of his rehabilitation is to do yoga. Guess who is his teacher.

Toby is a sweet young man who has had a rough time. He is out and prowd, but his ex has left him scared of big and scary men. He runs from Archer, but finds himself teaching him yoga anyway. Except for this time, they were alone. Things heat up real fast, and when the ex comes back, Archer knew he would do anything to protect the one he loves.

Now I have never been a fan of stories that involve sports. Probably because I have no idea of what they are talking about. However this author is amazing. I read book three in this series before reading the others, and lets just say that if this author is behind the books, then ten to one I will continue to read.

The characters are so real and the action is off the charts. You get so much in this story that you just can’t take your eyes off of it. There is even danger added in which for me is a bonus. I had a lot of fun reading this and can’t wait to read the other books. I would definitely recommend this book.

One thought on “Fair Catch by Leigh Carman”