Hi peeps! We have Alex Stargazer stopping by today with the tour for his new release Fallen Love, we have a brilliant guest post from Alex where he chats about pen names, a great new excerpt and a fantastic giveaway so check out the post and enter the giveaway! ❤️ ~Pixie~ p.s. keep an eye out for Shorty’s review coming soon! 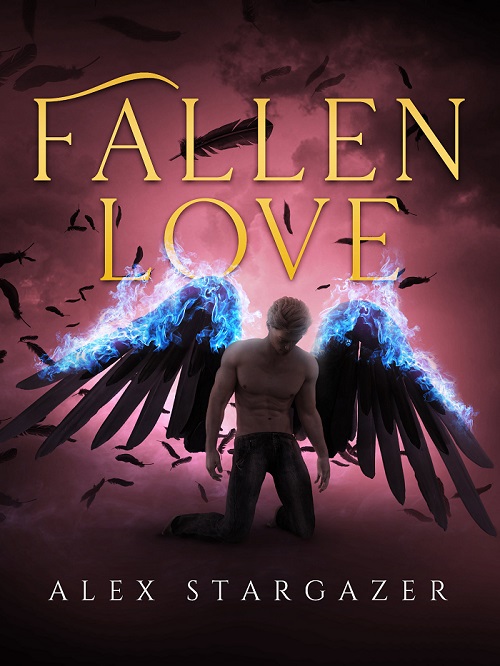 Hello everyone at MM Good Book Reviews! Today I’m going to write about a topic we’re all familiar with—pseudonyms. I want to answer the question of why authors use pseudonyms. What makes a pen name good or bad? What’s the reason an author might want to use a pseudonym in the first place?

Why Authors use Pseudonyms: My Story

When I began writing my first novel, the Necromancer, at 14, I knew I needed a pseudonym right away. When you have a name like Alexandru Bujorianu, you know English-speakers won’t be able to pronounce it—or, crucially, to spell it correctly and find it on Google and Amazon.

I considered trying to shorten my name or work around it. I tried permutations like Alex G Bujorianu, Alex GB, and even Alex G Blank. (Believe me, that one was pretty embarrassing.) These names either didn’t solve the problem, sounded too generic, or didn’t have a good ring to them.

I finally settled on Alex Stargazer when I launched my blog in 2014. The moment it popped into my head, I realised Alex Stargazer was the perfect pen name for me, and would adorn many of my future books.

It works successfully on many levels. To begin with, it’s based on my real name, which makes it easy to remember and address me with. It’s much easier to say “Hey Alex!” than it is “Hey Ithalquax!” (or some other made-up name). Secondly, the name Stargazer suits my stories down to the bone. I am a fantasy writer after all. Finally, it’s distinct, recognisable, and quite memorable—wouldn’t you agree?

Why do other authors use pseudonyms?

Let’s look at some famous examples. JK Rowling is named Joanna Rowling—the K stands for an imaginary middle name, and Joanna is abbreviated J to shorten the name. Joanna has also stated that the publisher made her use this name to downplay her gender (JK Rowling is a more ambiguous name than Joanna). Diverting attention from gender is one of the most common uses for pseudonyms; EL James, another famous author, chose her pseudonym because it sounded more masculine.

An infamous example of this comes once again from Joanna Rowling, this time with “Robert Galbraith”. If the two previous names were to downplay the author’s gender, this is outright concealment.

Besides gender-warping, what other uses does a pen name have? Let’s look at Cassandra Clare, author of the Mortal Instruments, or—as she is actually named—Judith Lewis. The purpose here is slightly less obvious, but equally important: Judith Lewis is a very generic name, like Jane Smith or Mary Sue. Cassandra Clare is a more distinctive name.

I suspect the name Cassandra Clare also appealed to Judith for the same reason I chose my pseudonym: it sounds good. It rolls off the tongue.

Finally, famous authors sometimes write under different names to see if their book is actually any good. Stephen King did this with Richard Bachman.

Despite the many famous examples of successful authors and their pen names, there are a lot of ways to screw-up a pen name. I showed you some examples at the beginning: Alex G Blank, Ithalquax, and so on. Here are the four cardinal sins of the pseudonym:

Alex Stargazer is obviously a name for a fantasy author. I write about mages, demons, dragons, and the undead—even if I squeeze in the odd romance or scifi element. I would have picked a different name if I wrote erotica (which I don’t) or crime thrillers.

Anyway, I hope you found this interesting! Do you have any opinions on author names? Share them in the comments below.

Two dart in front of us, and for a moment, I freeze. They are creatures of nightmare: their legs are spindly, misshapen, and they seem to glide across the road. They hiss again. A split second later, they leap.

The first is incinerated in mid-air by a laser flash, and the android crushes the second. A slick, black-green substance drips from its dead body; the smell almost makes me retch.

I snap back to reality: we need to keep running. The boy is already in front of me.

“Does it matter? Let the android take care of them.” Despite my cavalier words, I’m close to panic. I squint, trying to make out the Upper Quarter. Not far, I think. We can make it.

The android opens fire, and at a glance I see what the boy meant: there are many, way too many. Several fall in the firestorm, but others clamour to take their place. This isn’t a lone attack; this is a swarm. And we’re right in the middle of it.

But it’s too late.

A mutant slams into me with the power of a sledgehammer. I heave against it, fighting with its mandibles: I have to stop those fangs, so gleaming with venom, from sinking in and finishing me off.

And then the weight is off me. Through the corner of my eyes, I see it sail high into the air and into the reach of the android, but my sight never leaves the boy who saved me.

“I had to return the bleedin’ favour,” he says, hand outstretched. I don’t have time to thank him. He lifts me and we’re running again. The lights of the Upper Quarter are tantalisingly close. They shimmer behind an immense force-field, designed to keep out mutants and undesirables. Riffraff like the boy I just rescued.

Not that I have time to worry about that right now. “My ID will open the force field!” I cry, and I throw myself forward, fumbling for the ID.

With a flash of the reader, we cross the threshold. We’re in.

We breathe deeply, and I collapse against him. The mutants hiss, disappointed, and quickly slink back from the force field. A few are not so lucky, and are noticed by one of the guard towers. Machine gun fire turns the monsters into bloody smears on the ground.

Still, my interest isn’t on the monsters—it’s on him. It isn’t just the muscles, which are hard and powerful against my body. His scent is masculine, and sends a surreptitious thrill through me.

Before, I feared death; but now, I feel very much alive.