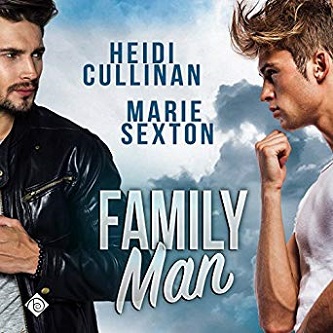 Blurb: At 40, Vincent “Vinnie” Fierro is still afraid to admit he might be gay – even to himself. It’ll be a problem for his big, fat Italian family. Still, after three failed marriages, it’s getting harder to ig-nore what he really wants.

Vinnie attempts some self-exploration in Chicago’s Boystown bars, far from anyone who knows him. Naturally, he runs smack into someone from the neighborhood.

Between working two jobs, going to school, taking care of his grandmother, and dealing with his mother’s ongoing substance abuse, Trey Giles has little time for fun, let alone dating someone who swears he’s straight. Yet after one night of dancing cheek-to-cheek, Trey agrees to let Vin-nie court him and see if he truly belongs on this side of the fence – though Trey intends to keep his virginity intact.

It seems like a solid plan, but nothing is simple when family is involved. When Vinnie’s family finds out about their relationship, the situation is sticky enough, but when Trey’s mother goes critical, Vinnie and Trey must decide whose happiness is most important – their families’ or their own.

Review: Family Man is a standalone book, which is a collaboration between authors Heidi Cullinan and Marie Sexton. Previously, I’ve enjoyed both authors on their own but since collaborations between fantastic authors doesn’t always gel, I wasn’t sure what to expect with this one.

The story starts with thirty-eight-year-old man, Vinnie Fierro. He’s from a massive Italian family in the suburbs of Chicago. He’s a plumber who is nagged by his family to live closer to them, and their family’s restaurant. The Fierro family are THE family in the area, the people to know and to get along with. A little stereotypical but I found it fun. After three failed marriages and a call to a job that gets him thinking, Vinnie starts to wonder if he’s gay and has been repressing his feelings. Although he feels some trepidation, Vinnie is willing to be open to possibilities. He isn’t angsty about it, just unsure and uncertain about how his Italian family would deal with it.

When he goes to a gay bar in the Boystown area, Vinnie is shocked to see twenty-two-year-old Trey Giles, who is a frequent customer to the Fierro’s restaurant and his grandmother is a family friend. The sparks between Trey and Vinnie are immediate. Trey hasn’t had an easy his life. His father died when he was young, his mother became a terrible alcoholic and it was up to he and his grandmother to keep things together. Trey had delayed going to college to help his mother, but nothing seems to be helping. I really liked Trey’s storyline because he is the character with true struggles and demons to deal with and he finds a lifeline with Vinnie.

One thing that I did look forward to was the narration. Colin Darcy is a narrator that I’ve become quite familiar with from his performances of some of the Dreamspun Desires audios. Darcy did a great job narrating Family Man. He added a lot of charm and appeal to the characters and I felt as though he was able to convey the emotions really well, yet someone in all that also sounded light-hearted. I particularly enjoyed the voice he gave to main character, Vinnie. It felt authentic (or as much as it feels authentic when you’re from the other side of the world and basing all your assumptions on TV and movies).

The book itself was excellent. Let’s face it, a later in life epiphany that involves falling for a much younger man can sometimes feel a bit tedious. Mostly because there is a lot of the same angst rehashed and massive dramas made over age gaps but not a lot. What I loved about this book was that instead of focusing much of the energy of the plot into the age gap and the older man insisting he was straight, we get to explore the conflicting emotions as the older man opens up and allows himself to face his feelings. In addition to that, because Vinnie is so open with his storyline, it makes for opportunity for a real well fleshed out plot regarding Trey and dealing with his mother’s condition.

I loved this one. I recommend this one for anyone that loves a good May- December romance.