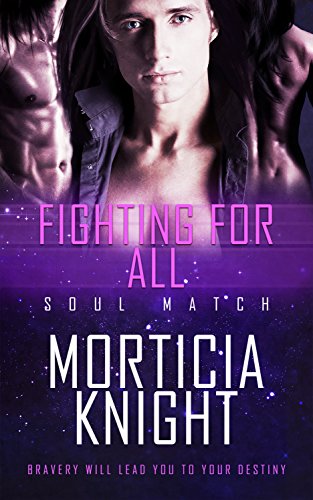 Title: Fighting For All

Blurb: Bravery will lead you to your destiny.

The human and alien rebellion is at hand, but those who have already arrived at the secret military facility are without the one who has inspired them to stand against the Nall. Chris, the human chosen by the Alasharian spiritual leader Sha Sha Ar, has been missing since the escape to the hideout. Those who have never seen Chris before, have only heard tales of his visions, begin to doubt his existence. Fear spreads through the group as humans and Alasharians alike wonder if they’re all doomed, if maybe Chris is a fantasy or has already fallen at the hands of the Nall.

Graham, Morgan and their Alasharian matches stand before the terrified group to reassure them that Chris is real. They’ve barely begun to speak when they are forced to fight an unexpected foe. But before the final battle against the Nall and the Void begins, all must search within themselves to discover what part they will play to achieve their destiny—and to summon the bravery they’ll need to see it through.

Reader Advisory: This book contains graphic battle scene violence and medical play, as well as references to rape and torture. There is also a scene involving urethral sounds.

Review: The entire series up to this point of human and Alasharian’s meeting their mates, unanswered questions lead to this exciting climax as they all go through a spiritual awareness to culminate with battle plans and strategies to beat all their foes. It will not be easy but nothing in life is.

I loved everything about this story. The danger was real, the battles intense and graphic that left me on the edge of my seat. I loved how all the characters worked together despite the doubts gathering around Chris. The twists and turns were a real eyeful and one even took me by surprise as I did not see it coming.

Needless to say this story was awesome.