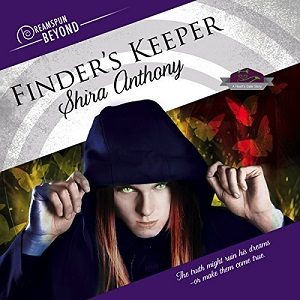 Blurb: The truth might ruin his dreams – or make them come true.

When Zane moves into an old gothic brownstone, he discovers the house comes equipped with a caretaker – Kit, who lives in the basement. Zane is immediately drawn to the charming and attractive Kit. But Kit is much more than he seems. He is a 200-year-old half-human, half-red-fox spirit who guards a Gate between the mortal and spirit worlds – a fact Zane should recognize, but doesn’t.

Orphaned at a young age, Zane never learned he comes from a long line of mystical Keepers. Kit needs Zane’s help to protect the Gate, but how can he tell Zane of his legacy when that will crush Zane’s dreams of traveling the world? If he takes up the mantle, Zane will be bound to the Gate, unable to leave it. But when Zane realizes Kit’s true nature, and his own, he’ll have to make a choice – fight to protect Kit and the Gate, or deny his destiny and any chance of a future with Kit.

Review: This audiobook has me feeling quite torn and I promise to try and explain it the best I can here. I just wanted to put it out there before I got stuck into the nitty gritty.

The story is about Zane and Kit. Zane has moved city to the home he has inherited from his estranged uncle, not knowing that there is an important family secret that he’s never been told and his role in the big scheme of things as a Keeper to the gate to the other world. I don’t think it was ever fully explained why Zane and his twin sister did not live with their uncle after being orphaned, but I suppose it just a plot device to get us to the point. He’s a cheerful, upbeat sort of guy who has big dreams to travel the world and generally live life to the fullest.

The old Gothic home has a caretaker, of sorts, Kit who is a half human, half fox (kitsune) spirit. His job is the guardian of the keeper and the gate. He has been guardian for eight keepers in his two hundred years of life. However, for the first time, Kit feels something more for his keeper and he doesn’t know what to do with it. He wants to fulfill his job, something that is draining him without the presence of a keeper. But his attraction to Zane is strong and he wants Zane to live a full life, not be restricted and trapped in the life of being the guardian of the gate.

Author, Shira Anthony, is not unheard of to me, I’ve not gotten into a lot of books, although I’ve previously enjoyed a book published as part of the Dreamspun Desires series. I really enjoyed the premise of Finder’s Keepers, the first in the Heart’s Gate Story, but I wasn’t sold on the execution of the plot. Perhaps how it was written? Perhaps the author’s writing style is not for me?

Regardless, I was not a fan of the unnecessary drama caused by Kit’s continual internal monologue about pining for Zane but wanting him to have a full life. This was where I really liked Lore, the odd entity was good for getting the plot to go forward while Zane was lost in his angst. Kit seems a bit like a drama queen, especially when Zane becomes so accepting of his new role in life. Since I didn’t have the best experience with this book I struggle to know who to recommend this for. I mean, I love a bit of drama as much as the next person and love to watch a good soap opera once in a while. The problem being I deem most of the drama unnecessary to the romance plot and there wasn’t a whole heap of action in the story either.

On the other hand, Kenneth Obi, the narrator of this book, is a new narrator for me and I have to say he was absolutely fantastic. For me it was his narration that pulled me through the length of the book. I loved his ability to give the different characters their own tone and voice. I particularly loved his voice given to the demon/entity Lore, who is basically the voice of reason amongst the angst. I also enjoyed the voice given to both MC’s, Zane and Kit.

I think I’m going to have to think twice before going on with this series, but one thing is for certain I would love to hear more narration by the very fine Kenneth Obi (he has lent his voice to quite a number of titles).