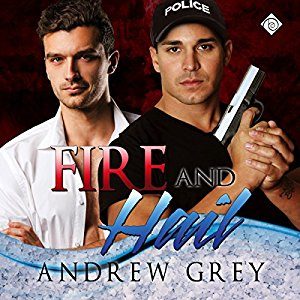 Vincent is also shocked to learn what his sister has done. For the sake of the kids, he and Brock bury the hatchet – and soon find they have much more in common than they realized. With Abey and Penny’s help, they grow closer, until the four of them start to feel like a family. But Vincent’s sister and her boyfriend – an equal-opportunity jerk – could tear down everything they’re trying to build.

Review: Fire and Hail is the fifth installment of Andrew Grey’s wonderful (and I say must read) series, Carlisle Cops. I love a good romance with cops, but for me Andrew Grey is a must read. He has rarely let me down every time I pick up a book or listen to an audio. I’m not sure if the series can go as a standalone, pretty sure it could, but I would admit going back and treating yourself to the previous four books. The reason I say that I am pretty sure it can be read as standalone because the plot is independent from the rest of the stories, but there are plenty of interactions with previous main characters in the Carlisle Cops series. I sort of remembered these guys but I didn’t go back to the ebooks while listening to this audio (which is something I do with some series to refresh my mind). The romance is hot and the attraction is there, I love how it developed through the book (I don’t like books that start with an explosion and then fizzle out).

As I said, I love Andrew Grey’s writing. I could gush about it all day (seriously, can I be the leader of the Andrew Grey Fan Club if there ever needs to be such an entity?). But the really, it all comes down to an easy to follow writing style with engaging characters and often some of the sweetest kids. In addition, Randy Fuller narrates a number of Grey’s books and I really enjoy the voice he gives all the main characters as well as the kids that are in their lives.

As to the plot itself: Brock Ferguson left Carlisle some years ago but he’s back now and is the newest member of the police force. He always knew that going back to Carlisle could mean that he could run into his ex-boyfriend, Vincent Geraldini. And of course, he does run into the man, when Brock pulls Vincent over for a routine traffic stop. Vincent attitude is pretty foul – he doesn’t give the reader the best introduction – and serves to vindicate Brock as to why they are ex. But shortly later, Brock finds Vincent’s neglected niece and nephew locked in the boot of a car and Vincent is once again apart of Brock’s life. Especially when it becomes clear that Abey and Penny like Brock and find it hard when Brock isn’t around after their mother (Vincent’s estranged sister) is arrested.

It’s a complicated story line and matures into a well developed plot – with a romance that is all about second chances. I like how Brock and Vincent’s second chance shows that both men have changed for the better and there has always been a deep connection between the two. It just seems that they finally in the right place at the right time.