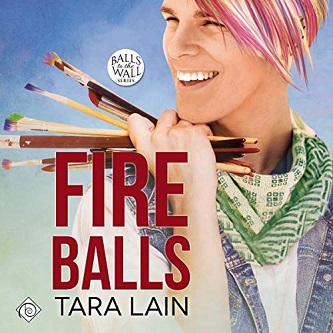 Series: Balls to the Wall 02

Hunter lives a dream life – his father’s dream. While he’d like to teach literature in college, read poetry in the sun, and find a strong guy to top him, he fights fires for his dad. Hunter hates flamboyant guys like Rodney. So why can’t he resist him? Maybe it’s time to admit this is one flame he has no desire to put out.

Review: Fire Balls is the second book in Tara Lain’s series Balls to the Wall. I decided to go back into this series, despite not liking book 1 much (I will admit, I had a lot of issues). However, there are plenty of other books/series by Lain that I adore. Typically, I really like Lain’s writing and the characters.

And let’s be honest, although I enjoyed this story more than I did the first book, I can’t say that it was the best thing ever. I know why I didn’t connect with the story, it’s pretty simple really. I feel that the characters suffered with the length of the book. There was not enough room for development and so there were a lot of sudden changes in attitude and some questionable personality traits that weren’t explained. This is true of the first book in the series as well.

The story is about artist Rodney Mansfield and firefighter Hunter Fallon. This is very much an instalove type of situation, however, the roadblocks that prevent these guys getting together include bigoted views from Hunter’s friends who also happen to be firefighters (I got really annoyed that he didn’t stand up for himself because these guys didn’t seem like real friends, and his brother was an arse). The issue being that Rod is out and proud, he’s not a manly man although he isn’t femme either. He is just himself and has no apologies. Meanwhile, Hunter is “straight gay” and insecure especially when he encounters someone like Rod, who he sees as weak, and the man is in fact stronger than Hunter.

Yet in saying that, this story is all about tackling these horrible and bigoted misconceptions and this is what I liked most about the book. Unfortunately, I felt that it needed to be taken a step further.

The narration for the story did lift my overall enjoyment of the book. It was excellent. I think that Nick J Russo is an excellent narrator and done a hell of a lot to lift the original material. Russo is one of my favourite narrators and it was a joy to listen to him despite my feelings for the story itself.