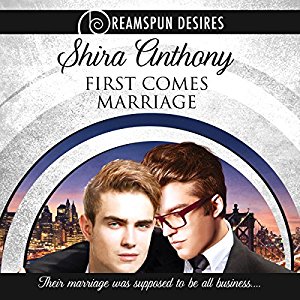 Jesse’s in a pinch. To keep control of his company, he has to marry. So he has valid reasons for offering Chris this business deal: in exchange for living in a gorgeous mansion for a year, playing the doting husband, Chris gets all the writing time he wants and walks away with a million-dollar payoff. Surely Chris can handle that. He can handle living with the most handsome and endearing man he’s ever met, a man he immediately knows he wants in the worst way and can’t have. Or can he?

Review: John Solo has become one of my favorite narrators and I was so glad to have to gotten to hear him tell this story. The way he can give each character a distinctive voice is what makes it even better. I love the way he paces everything and makes the book more enjoyable.

The way that these two meet was quite delicious. Chris is a novelist who has a chance at giving some great stories. He just needs to be given a chance. He is writing on the side as he works as a barista in New York, which let’s just say it, it is one expensive place to be. He knew there was someone in the crowd from the publishing company but he had not expected Jesse.

Jesse is a billionaire who had just lost his father. His father had this quirky idea to see Jesse happy so one of the clauses in his will was for Jesse to marry. Find one that he loves and makes a happy marriage. However Jesse just chooses Chris and decides that is fine. He just had not expected to slowly start falling in love. Now he just needs to convince Chris. The problem is Chris doesn’t want marriage.

Shira has given a completely new look at being Cinderella that is for sure. I enjoyed this story and look forward to seeing what other stories she has out there. She gave us a very believable story with a touch of magic in it. I loved the little twist that was included and I hate to say it I absolutely loved the stepmother. The secrets could have been done different but other than that it rocked. I loved it and would definitely recommend it.