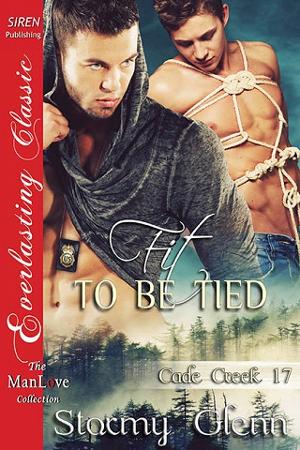 Title: Fit to Be Tied

Blurb: DEA Agent Dan Wilson was just looking for a place to rent. He had no idea that it would bring him the love of his life. When he rented a room in an old Victorian just blocks from work, trouble started the very first day. For one, the guy who rented the room to him wasn’t the owner. Waking up in bed with Terry wasn’t the worst morning he’d ever had, but learning he had been taken for a fool kind of was.

Terry Iverson is incensed when he learns one of his tenants rented out his bedroom to a stranger, the bedroom he’d lived in his entire life. Of course, if he was going to choose someone to share a room with, it would be the handsome DEA agent. It would be great if he was gay, but Terry was a little too afraid to ask. He was the guy’s landlord after all.

When someone starts messing with Terry’s life, going from making false accusations of sexual harassment against him to trying to kill him, worrying about dating his tenant seems minor in comparison. If he can make it out of this alive, he just might see if the sexy agent was interested in something more than being roommates.

Terry should have never accepted to work so many shifts back to back, tired he heads home only to wake up in the morning to someone in his bed. It would seem his roommate has rented his room out, to bad the house is owned by Terry. Although the man in his bed is one hell of a hot and sexy man.

Dan spent quite a bit to rent out a room but he had not expected to wake up to one fine looking man. Of course he also had not expected to find out that he had spent money to rent a room and it to be a scam by the man who rented it to him. Although things might just get interesting. Especially when someone is out to get Terry and damn if he is not going to keep the man safe.

This story caught my attention from the start and kept it all the way to the end. The guys are sexy and dangerous in their own way. Terry is a paramedic and Dan is a DEA agent. I am not really into the whole tying up part but this author seems to write them pretty hot and not so kinky. I enjoyed reading this book and love the characters although I did miss the cute mayor in this book. I actually found myself missing the whole gang sticking their noses into it.

I had a lot of fun reading this and can’t wait to get my hands on the next book. I would definitely recommend it.