Hi guys! We have Lee Colgin stopping by today with her new release Forbidden Bond, we have a great excerpt and a brilliant $10 NineStar GC giveaway so check out the post and enter the giveaway! ❤️ ~Pixie~ 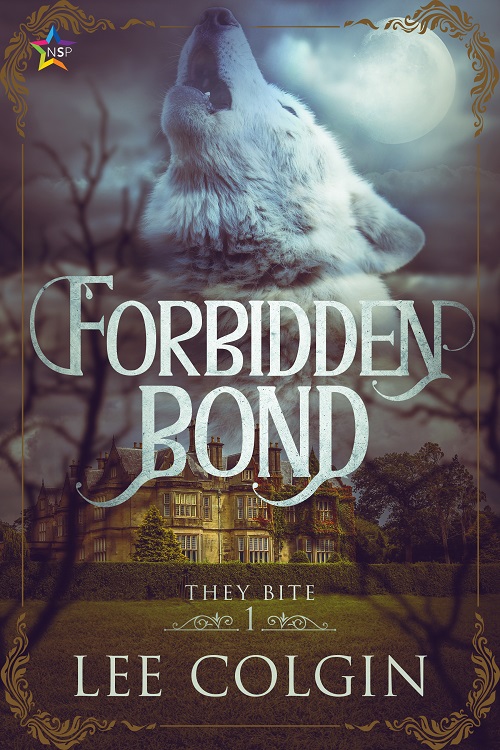 Vampires and werewolves are historical enemies. When the Peace Accord that imposes an uncomfortable armistice between the species is threatened, the entire supernatural community must respond.

Alpha wolf Mitchel Edgehill is furious when the university sends a vampire to be housed among his pack, even if he is cute. But there’s nothing he can do since the paperwork has been signed. They’ll have to find a way to coexist.

As tension rises within supernatural society and violence escalates between vampires and werewolves, an uneasy truce develops between Sinclair and Mitchel. The pair attend a peace conference in hopes of preventing war, but when a rogue group of humans attacks, Sinclair is kidnapped and held for ransom. Can the alpha wolf work with vampires to save Sinclair, or will war break out after all?

Sinclair stood outside his father’s door, collecting his thoughts. This wouldn’t be easy. To get what he wanted, he’d have to remain calm and focus on the part of his plan most likely to benefit the Vampire Council, over which his father, Luther Davis, presided. Sinclair could do this; he just had to stand his ground. One last deep breath, a polite knock, and he stepped inside.

“Sinclair.” His father welcomed him with a nod. Seated behind a large desk cluttered with papers, he looked busy as usual. Having been Turned and preserved at the young age of twenty-two, the fair-haired, sharp-featured vampire could be mistaken for Sinclair’s younger brother, not his father. Sinclair was twenty-six, but only twenty-six. His father had centuries on him, not that you could tell by looking. “What brings you by this evening?”

Okay, here it goes. You can do this. “Dad, I’ve decided to attend Borson University for my PhD this semester,” he said in a rush. Slow down, Sinclair. “I know you weren’t expecting this, but Borson is the best school for Historical Supernatural Studies. I was accepted last fall and I’ve already registered. No other vampire in the council has this degree; I would be the first.”

Sinclair prepared to continue, but his father spoke first. “Son, that’s a werewolf school.” His golden brows drew together. “It’s too dangerous. What’s the degree even worth, coming from Borson?” His stern voice matched his expression.

“I understand your concern, but it’s safer than you realize. I’ll be part of an exchange program. It’ll be good for the council to have a delegate at Borson. It’s a quality academy with a fine reputation, werewolves notwithstanding.” Sinclair talked to fast when he felt nervous.

Luther stood. At nearly six feet, he stood taller than his son by several inches. “The answer is no, Sinclair.” His father approached. “You’ll attend Moore as planned, and I do not appreciate you addressing this at the last minute either. Did you think that by waiting until now, you’d stand a better chance?”

“Um, yes, actually,” Sinclair responded, a stubborn edge to his voice. “Dad, I’m an adult; I don’t need your permission. I need the council’s permission, and I think they’ll grant it. I told you first as a courtesy, the petition has already been submitted, so the discussion will happen at tonight’s meeting. Moore doesn’t offer the courses I require, and the council doesn’t need another finance major; it needs a historian.” His point made, some of the tension drained away.

With an irritated sigh, his father’s gaze drifted to the window. “You’d do this to your mother? You know she will worry. At least accept the transition first, so you won’t be vulnerable. Let us Turn you. You’ve delayed too long. There are no other Living vampires your age.”

Their eyes met. Sinclair felt both guilty and defensive. Guilty because he didn’t want to worry his mother. Defensive because he wasn’t ready to die for immortality. He liked his living, breathing body, eating food, and little things like not burning to ash in the sunlight. He’d hold on to it as long as he could, thank you very much. Being a Living vampire had its advantages, even if his father was too ancient to grasp them.

Sinclair ignored the tired issue. “I’ll keep in close touch with Mom, I promise. I won’t let her worry. Look, Dad, this is a rare opportunity. Vampires don’t get accepted to Borson. Think of how much I’ll learn. It would be impossible without the exchange program. Only four students are selected. It’s an honor.”

When his dad didn’t respond, he continued, “I have to go. I’ve already accepted. There’s no alternate to take my place, and it would be rude to refuse now.”

“So you have me in a corner then, don’t you?” His dad’s gaze settled on him. Sinclair fought not to flinch. His father was not a harsh man, but everyone had their limits, and the head of the Vampire Council didn’t tolerate werewolves lightly. “Why bother to ask at all?”

“I was hoping you’d come to a different conclusion. I thought maybe you’d be proud.” Sinclair’s gaze dropped to his feet.

His dad came closer and took Sinclair by the shoulders, giving him a small shake. “You frustrating boy, of course I’m proud, but this is an unnecessary risk. I wish you’d reconsider.”

“I’m going to go, and it’s going to be fine. I promise.” Sinclair accepted the cool embrace with relief.

“We’ll see what the council has to say,” his dad conceded and ruffled his hair.

Sinclair knew that, in the end, this meant even his father approved. Ultimately, a Doctor of Philosophy in Historical Supernatural Studies would be beneficial to the species. In a society full of forward thinkers and finance managers, Sinclair alone would be studying the past. He’d learn what had brought them to war, what mistakes had been made, and he’d prevent them from repeating those blunders.

There were supernaturals, even now, whispering the beginnings of another war. Sinclair’s work among the werewolves would be crucial. Lee Colgin has loved vampires since she read Dracula on a hot sunny beach at 13 years old. She lives in North Carolina with lots of dogs and her husband. No, he’s not a vampire, but she loves him anyway. Lee likes to workout so she can eat the maximum amount of cookies with her pizza. Ask her how much she can bench press.

If you enjoyed this book, pick up Lee’s debut novel Slay My Love to find out what happens when you’re attracted to the very person who want to kill you an enemies to lovers 56,000k novel available now.