Hi guys! We have W.S. Long popping in today with the tour for the Forbidden In Uniform Boxset, we have a great excerpt and a fantastic giveaway so check out the post and enter the giveaway! ❤ ~Pixie~ 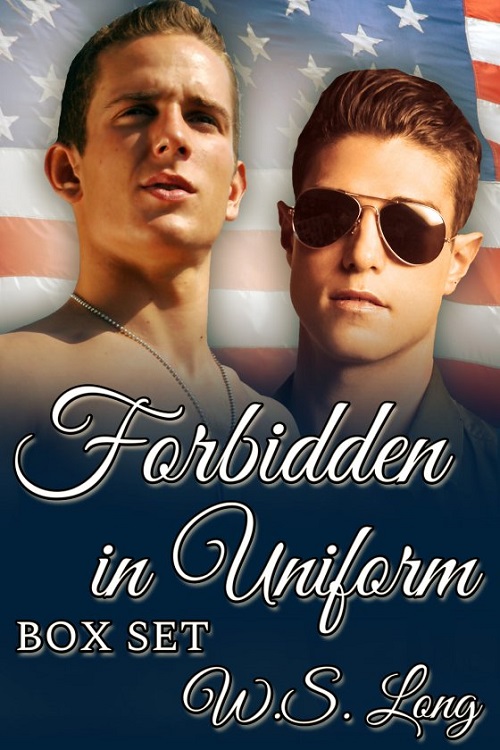 Ask and I’ll Tell: Raised by his aunt, after his mother died, Pad McLaughlin enlisted in the Air Force to see the world, and save money for college, but he didn’t expect to fall in love with his supervisor, RJ Davis, a handsome, dashing officer. Rather than return home right away after his tour of duty in Saudi Arabia, Pad gambles on love by joining RJ in Bangkok, despite the government’s policy of “Don’t Ask, Don’t Tell.” When Pad realizes RJ doesn’t love him, he returns home broken-hearted only to be distracted by Wayne, another hunky airman, who keeps secrets from Pad.

When RJ finally realizes after Pad’s gone what Pad means to him, is he too late? Will Pad choose the officer or the airman? Set in 2008, this love story takes place before the end of “Don’t Ask, Don’t Tell,” when gay men who loved each other were forced to remain in the closet and deny themselves happiness.

Splendidly Ever After: Seven years after they meet, and more than four years since RJ initially proposes, RJ and Pad are back. The wedding invitations have been sent again and the date is set. This time, both men are more committed than ever to each other and willing to make their relationship work.

But old issues surface that cause conflict before their big day. Will RJ’s recent diagnosis of sexual addiction disorder tear them apart? Can they weather the growing disapproval from their families over same-sex marriage before they walk down the aisle? Will RJ and Pad finally tie the knot? EXCERPT FROM “Ask and I’ll Tell”

Note: may contain sexually explicit scenes of a homoerotic nature.

Pad wanted to wake him up and get water in his system but he seemed okay, and they would be at home soon.

Wayne turned to look at them.

He couldn’t figure out Wayne. At moments, Wayne wanted to engage him, but on other occasions he focused on Jack. He also noticed Wayne check out several of the guys at the club while they were dancing. In turn, when Jack and Wayne took off their shirts, a lot of eyes were on Wayne.

A couple of streets flew by fast as Jen picked up speed. Wayne flapped the car visor down and stared at its mirror. Wayne’s eyes on him. Pad recognized that look. Wayne wanted him.

Yes. He’s fucking hot. And he knows it.

May be the best way to forget RJ is to be with someone. Someone who wants me.

The smell of coffee woke him up, but Pad lay there in bed. He had very little room to move since Wayne slept to his left on the adjacent futon, and Jack slept next to Pad with a wall of pillows separating them. His head throbbed and he remembered he drank quite a bit himself. He leaned over and checked on Jack. Wayne and Pad stripped him of his clothes last night and put him under a cold shower to reduce the chances of alcohol poisoning. After Pad dried off Jack, he put him to bed.

With the sunlight intruding into the bedroom, he slid to the edge and began the process of scooting his feet out when Wayne sat up in the futon, his hair sticking up from static, his chest, his nipples and very flat stomach exposed.

Wayne yawned, brushed the sleep from his eyes. “Good morning,” he whispered.

Even with his hair messed up, Wayne’s haunting blue eyes and smile made Pad thank God for the beauty He created.

“Wonderful. Except my head’s throbbing.”

“I think he’s fine especially after he threw up most of what he drank.”

Pad nodded. Jack’s super skinny form lay next to him, a low snore intermittent from time to time.

“Bet Jen made coffee to get us up.”

Pad stood, pulled up his boxers since they draped loose on his hips. As he headed to the bathroom, he saw his reflection in the mirror. He didn’t look that hot, his own hair all over the place and, as he got closer, he saw some dark circles under his eyes. He saw Wayne’s reflection, and caught Wayne staring at his ass.

He grabbed his toothpaste and brush and continued to freshen up. Wayne watched him, and their eyes met in the mirror.

He’s very cute, and he knows it.

Wayne smiled. Pad wondered if Wayne just read his mind. Nothing happened last night between them because of Jack, but he wouldn’t stop it if Wayne made a move now.

I want him to make me forget about RJ. Win an Ebook of Forbidden In Uniform Box Set!

One thought on “Forbidden In Uniform by W.S. Long Series Tour, Excerpt & Giveaway!”