Hiya guys! We have Alex Beecroft popping in today with her new release Foxglove Copse, we have a great excerpt and a fantastic giveaway, so check out the post and leave a comment to enter the giveaway! <3 ~Pixie~ 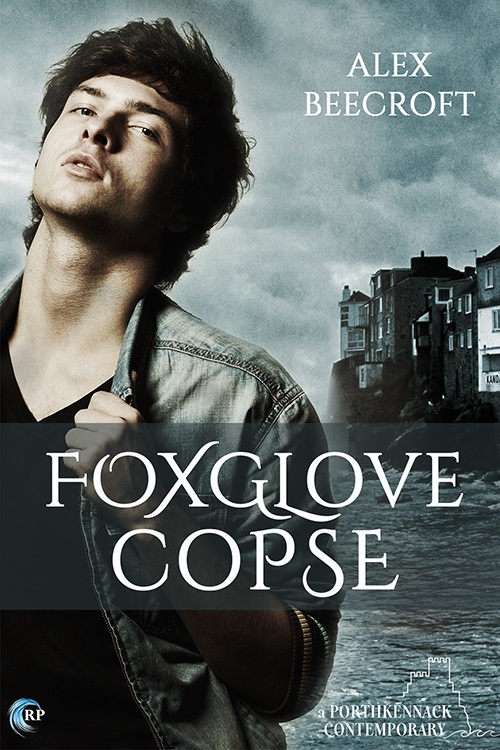 After a massive anxiety attack, Sam Atkins left his high-powered job in the City and committed himself to life on the road in a small van. Six months in, he’s running out of savings and coming to the conclusion that he might have to go home to his emotionally abusive family.

Needing time to think, he takes a walk through a copse by the Cornish roadside, only to stumble upon the body of a ritualistically killed sheep. As he’s trying to work out what the symbols around the animal mean, the sheep’s owner, Jennifer, and her nephew, Ruan Gwynn, come upon him.

Ruan is a kind-hearted young man with a large supportive clan, and since he and Sam feel almost instant attraction, he doesn’t want to believe Sam is a sheep-killing cultist. In fact, the moment he lays eyes on Sam’s miserable solitary life, he wants to rescue the man. But as the killings escalate, he and Sam need to stop whoever is actually to blame before they can concentrate on saving each other.

It was true that he had three hundred and seventy-five pounds eighty-four pence to his name, and he didn’t know what he would do when it ran out. But if he found somewhere more permanent to stop, he could certainly eke it out until after Christmas. He could not bear to put himself in their clutches for the season of goodwill.

A half an hour later, he came back to himself to find he was watching the rain snake in silver serpents down the windscreen. As his brain rebooted, he discovered he was tired but ready to move on. Slipping into the driver’s seat, he started her up, easing back out into the A30 traffic with no clear destination in mind. Maybe Bodmin. Perhaps he could stop somewhere on the moor and live in a neolithic shepherd’s hut, like Sherlock Holmes.

But Bodmin was featureless and grey in the rain, with a bleakness he didn’t need on top of his own. On a whim, he turned up the B3274 and headed towards Porthkennack instead.

As if by omen, the rain slackened as he came within sight of the sea, and the sunset drew brief bands of gold across the horizon. The road crested a small hill, from which he could see down into a galaxy of homely windows, and afar off the silent pulse of a lighthouse.

To his left, a gap in the hedgerow beckoned. He slowed, the only vehicle on the road, and turned his lights to it. Yes. There was a faint track. Beyond it, a swaying shadow against the stars, was a woodland, where the glint of a brook vanished into glossy rhododendron and the low, broad leaves of foxgloves open like imploring hands in the gloom.

Running water and camouflage—he might stay there for some time without being seen. Making an instant decision, he rolled gently up the bank and carefully, carefully into the wood.

Three trees in, a fallen stump leaned across the track. At one point the wheel ruts had continued out into the distant fields, but it seemed that when the tree fell, the path had been abandoned to grow ferns and briars. That suited him; no one would be coming in or out. He would not be blocking anyone’s access if he stayed here awhile.

Turning the engine off, he grabbed his torch from the glove box and stepped out into a shocking silence. No cars moved on the unlit road and the sky was end to end with stars, bleak and magnificent as the glitter of an iceberg. For a moment, it felt as though time itself had stopped, that he was the only human left in the universe. A chill crawled up his back.

But then the wind swept from the sea and sighed through the treetops around him. The moment passed as he folded out the mast for the wind-turbine and connected it to its battery.

Fallen branches littered the ground. He picked up some sprays of rhododendron and leaned them against the van’s green side, camouflaging it. Walking back to the road, he looked in and could not see her. Good. The concealment might not survive the coming of the dawn, but he should at least be able to sleep in peace.

He collected branches for the wood burner and stacked them in the passenger side footwell to dry out, laid his laptop on the fold-out table, and considered browsing the job sites for temporary work nearby. Just the thought of it narrowed his chest until he couldn’t squeeze in a breath. Clocking in at a regular time, talking to people, pay cheques, responsibility . . .

Turning his back on everything, he decided to take a walk and then go to bed early. Maybe, when he’d had a good night’s sleep, he could face his future.

Barely five minutes’ walk down the overgrown, abandoned path, the wood gave way to rough grazing land on a one-in-seven slope. Once he had come out of the trees, he could see down, in shades of dun and grey, past humps of rocks, to the solid black presence of a distant farm house, with lights burning behind its windows. The flecks of white scattered across the hillside must be sheep.

It took him a while of watching the fluffy white dots move, sweeping in one scatter from a nearby epicentre, before it occurred to him that this was not how sheep normally behaved. The baas that gusted to his ears on the wind were high-pitched and full of panic. Something had spooked them—something over by that cluster of rocks.

Curiosity drove him down the rough hummocks of the tussocky slope, heather and grass slippery under his wellies, his wind-up torch dimming as its charge ran out. The circle of light turned to umber and vanished altogether. He didn’t wind it again, because the moon and stars were shining brightly. He could see enough, and he didn’t want to be seen.

As he approached the rocks, he saw with a lurch of foreboding that they were not just tumbled there by the landscape. Five of them stood up on their narrow ends like the fingers of a buried hand, and in the centre of the “palm” something dark and small lay.

He thought it was another stone at first—an altar stone, where tens of thousands of years ago the neolithic people here had placated their gods. But then the gusting wind brought the smell.

Before, the night had been all newly washed rock and grass, distant seaweed. Now, his already unsettled stomach writhed inside him like a hatching alien, because this was a warmer scent. Blood. Blood and shit and acrid fear—the smell of death.

Why he ran forward, he didn’t know. Maybe to help. But the animal in the stone hand was past help. One of the sheep, its white coat so sodden with blood that even under the moon it did not gleam. It lay on its back, the rib cage cut open with ugly, tearing wounds, the bones severed at the back so that it could be opened like a flower to show that all of the organs had been removed. To celebrate the release of Foxglove Copse, one lucky winner will receive a $10 Amazon gift card and an ebook of their choice from Alex’s backlist!

(Entries close at midnight, Eastern time, on September 9, 2017. Contest is NOT restricted to U.S. entries.)