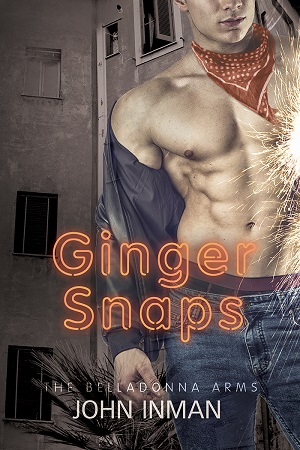 Blurb: Even with a string of earthquakes jarring the tenants of the Belladonna Arms, rattling nerves and smashing dishes, life still manages to plod along as usual. Love pollen continues to fall, romances continue to flourish, and Arthur, the grand Pooh-bah in residence, continues to plan his upcoming wedding extravaganza.

In the midst of all this drama fall Gideon Chase and Reed Kelly, two redheaded losers at love who find themselves regrouping under the auspices of the most incorrigible matchmaker in heels.

Arthur sees hope for the two right away. He leases them adjoining apartments, then continually tweaks their budding friendship in the hope it will slip into love. Just as Arthur’s plans are coming along nicely, Reed’s past shows up to toss a monkey wrench into his and Gideon’s blossoming romance.

With Arthur’s wedding ceremony nigh, and Reed and Gideon on the verge of heartache yet again, Arthur faces one inescapable conclusion.

It will take more than love pollen to sort this mess out.

Review: Each book in The Belladonna Arm’s collection features a new romantic couple. To enjoy the overall story arc and crossover characters, I would recommend reading the series in sequential order.

Arthur is getting married and it had better be perfect. He has found to gorgeous ginger men who he knows are going to just hit it off or they are going to find the grand pooh-bah upset. Let me tell you know one wants to see him upset.

Gideon has had his heart broken one to many times, this time it was by a cheating snake. So he was starting over. The creep had also dumped all his stuff in goodwill, so starting over was all he had. Thank god for a good friend who had a place lined up just for him. However his new and crazy landlord saw love in the air for him. He had not believed it, that is till he met the guy who lived in the apartment next door.

Reed has finally been honest with himself and his wife, soon to be ex-wife. He had come to terms with him being gay, but he wasn’t really sure how to start over. He moved in a few hours before Gideon and things were going to get real interesting, that is as soon as they realize to red heads could hit it off. To top it off every time the earth shakes you could hear Arthur screaming bloody murder. How are to cats suppose to survive these crazy humans. Then there is an ex-wife who just can’t get her head straight on, and oh you have just got to see where this will go.

This series was what introduced me to this author and lets just say it has my attention all the way. There is adventure, excitement, some crazy characters and lots of love, not to mention the pollen of love just floating around. You also get one crazy group of characters that will charm you and keep you entertained through out. It is a very well developed story with so much to offer you. I always look forward to one of these books and hope that they will continue to lighten my day.

I had a blast reading this and can’t wait to get my hands on some more of John’s work. A gifted author is all I have to say about him. His worlds will always keep you smiling. This is one story that I would definitely be reading more than once. I would also recommend it and the previous books in the series.