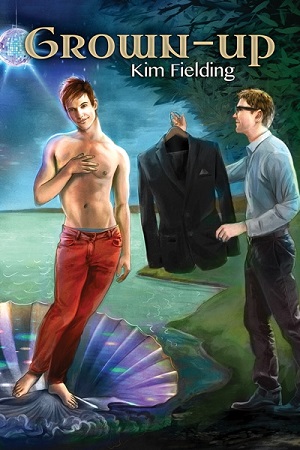 Blurb: It’s time for Austin Beier to grow up. His car is falling apart, his roommates are less than ideal, and he’s just been fired for the umpteenth time. His love life hasn’t evolved past bathroom hookups at his favorite clubs. Forced to borrow money from his father yet again, Austin is walloped by an epiphany—he needs someone to mentor him into maturity. And who better to teach him how to be an adult than Ben, his father’s office manager? Cute in a nerdy sort of way and only a few years older than Austin, Ben is a master of organization and responsibility. But as he gets to know Ben better, Austin learns that whether you’re eight or twenty-eight, growing up is never easy.

Review: First off, the cover had me laughing. I’m sure many will recognise as a parody of that painting of Venus in a half shell (Birth of Venus by Boticelli), which is very symbolic because this is all about Austin Beier (in his late twenties) putting on his big boy pants and growing up. The more I think about it, the smarter I think it is.

Austin is a party boy and has difficulty keeping down a job. He has an interesting family dynamic, though his father and stepfather are wonderfully supportive (even if there is no appearance of his stepfather). A talk to his father and his own intuition makes Austin realise he has to grow up. So he turns to his father’s long time employee, Ben, only a couple years older he is highly organised and has his life on track, albeit a somewhat lonely one.

This is a fun read and for the most part is light-hearted, with a sprinkling of humour. I loved both characters and I particularly like the development that Austin goes through in his endeavour to “grow up”.