Hi guys, we have Natsuya Uesugi stopping by today with his new release grydscaen: Dark, we have a fantastic exclusive excerpt and a brilliant giveaway so check out the post and enter the giveaway!❤ ~Pixie~ 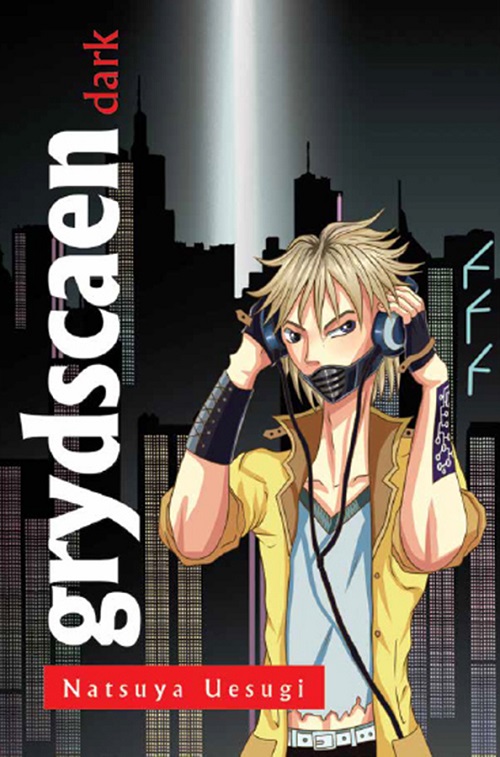 A clandestine meet occurs in the Echelons under cover of darkness where Top Secret intel on the stock market changes hands. The insider tip gets the gothic hacker Jester engaged in a high tech game. Parliament votes to lower harsh stock market regulations fueling the Corporation’s bottom line, a payoff from ministers who were propped up by illegal corporate campaign donations. Ordered by Jester, the teenage hacker Rom infiltrates the largest high volume brokerage house causing wild gyrations in trading. When Jester triggers an insidious stock market payload, all hell breaks loose threatening the pristine City. Will Zoon, the leader of the Triumvirate, get roped into the fray? Can Raven, the government hacker, put the cryptic clues together before the market crashes? Find out in grydscaen:dark. Whose side are you on? Rom stood on the street corner at a lamppost lounging, headphones blaring electronica to block out the noise. He watched people shuffle about aimlessly down the alleyway trying to get away from the chaos. There were people shoving and yelling on the main streets, placards and signs held high, fights breaking out randomly in the fray. The shouting and chanting of “Down with the Elite government” rang through the air. The riots were everywhere, affecting all main streets in the Echelons. There were beatings and the Newsfeed had broadcast numerous rapes that had happened overnight and two in broad daylight just this morning.

There were three Zone Police officers at the alleyway where the entrance to Jester’s hacker guild was. Rom gave it a few more minutes but the cops didn’t clear out. He shoved his hands into the pockets of his trench coat and abandoned his position.

He sneaked down the sidewalk east towards Hack, the tech and ware nightclub and saluted the bouncer playfully who let him in without carding him. Rom had a birthday yesterday, still too young to get into Hack though his fake ID said otherwise. He let his birthday go by. He was unimpressed, taking his iodine pills on schedule just glad to have survived the year without getting radiation sickness.

Rom took the back stairs to the second floor and found the hardline terminals at the rear of the dark room. The DJ booth was to the left near the computer entertainment setup where hacking was executed, the code projected on the wall sized display board in the middle of the room. He pulled the headphones off his ears letting them rest around his neck. Hack’s DJ in a trance set, the senso enhanced music created a low ambient buzz that left a feeling of excitement on the room. Rom pulled out the chair in front of the far left NEK hardline terminal and sat down softly clasping his hands in his fingerless gloves and stretching his fingers. He pulled a pin drive out of his pocket and attached it to the front port engaging, fingers flying across the keys as he logged in.

Rom pulled his handheld out of his pocket and sent a text to the Hack prize desk. A few minutes later the prize desk operator came over waving a red data card.

“You asked for the fix?”

“Yeah. It encrypts the traffic, no trace back, cycling, no IP?” inquired Rom.

“The same. Any code and data is wiped on session exit. Messages display for five seconds then ether, gone.”

“Solid. I want it,” smiled Rom and stood up.

The prize desk operator grabbed the back of the chair yanking it out of the way and leaned in inserting the data card into the terminal. A prompt came up and he typed a string of code that displayed in white characters across the black screen then hit the Command button. A popup flashed with a message that displayed on screen: ‘Full encrypt. No trace back. Fix secure until logoff.’

The prize desk operator pulled the data card out and smiled wide. “All set. Now don’t destroy the government on that thing.”

The operator patted him on the shoulder and left as Rom sat back down and navigated to the pin drive, copied a script and loaded it onto the terminal. Natsuya Uesugi is a systems analyst and ethical hacker by day and a manga artist and a writer by night. With an MBA in International Management and a minor in Japanese, Natsuya insists on showcasing diversity in his writing using his Japanese, Native American and African American heritage.

He studied animation and game design in art school and has published the grydscaen manga “A Storm’s Coming” which features the LGBT teen Rom from “grydscaen: dark,” and two manga in the yaoi series “graphic noiz.” Two episodes of the short anime “A Storm’s Coming” is available with a third episode planned. Four counseling centers are currently using the “A Storm’s Coming” novelette to help LGBT homeless youth and troubled teens with self esteem.

He is author of the dystopian cyberpunk “grydscaen” series, the dark fantasy trilogy “”The Seer of Grace and Fire,” and the yaoi novels and manga “graphic noiz.” He enjoys skydiving, cosplay, watching anime in Japanese, watching French news, World Cub futbol, eating ramen and anything with matcha, and writing poetry. Win ecopy of grydscaen: tribute and A Storm’s Coming one shot manga!