Hi guys! We have Victoria Sue visiting today with her exciting new release Guarding His Melody, we have a fantastic exclusive excerpt and a brilliant $50 Dreamspinner GC giveaway, so check out the post and enter the giveaway!  ❤ ~Pixie~ 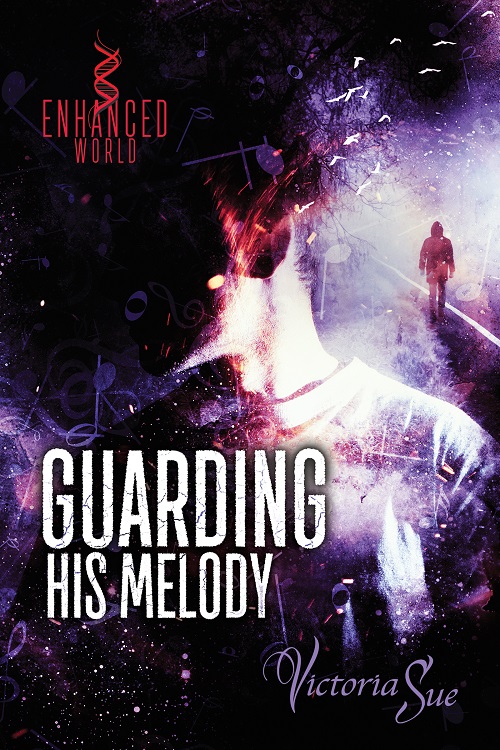 Deaf since childhood, Sebastian Armitage had a promising musical future until his dreams were shattered when he transformed at twelve years old. In a world where enhanced humans are terrorized and imprisoned, his life shrinks around him even more as he suffers the torment of his father’s experimental research to enable him to hear.

As the lines between protection and attraction blur, Gray and Seb can’t ignore the intense feelings drawing them together. But secrets and betrayals might prove deadly, unless Gray is willing to risk it all. And Seb must find the strength to make his own future and sing his own song

Not enough hours later, Seb woke instantly at the shake of his shoulder but knew who it was. He opened his eyes to look at Gray’s. He groaned suddenly, warm and willing to sleep the morning away. “I’m not hungry.”

Gray’s eyes crinkled. “Good, because I’m not feeding you.”

That got Seb’s attention. “What are we doing?” Then he noticed the clothes in Gray’s hands. They were his. Gray tossed them next to him onto the bed.

“Get dressed. Meet me in there.” He gestured to the other room and walked out.

Seb knew his mouth was hanging open, but curiosity got the better of him, and he climbed out of bed and started getting dressed. He looked at his new phone and then did a double take. Five fifty? What the hell?

He shivered. It was freezing, and the heating would only have just clicked on if they were lucky. Seb quickly pulled on his socks, sweatpants, T-shirt, and a sweatshirt, then paused. Gray had even brought in his old sneakers that he vaguely remembered tossing into the cupboard in the other room. Both his Converse and his Nikes were downstairs, but even so, why would he need them? And it was too early to see the guy who was making alterations to the windows and stuff… and Seb had told Gray he didn’t eat breakfast. Grumbling quietly, he noted his clothes were a little looser than last time he had worn them. He really was going to have to try to get more power bars or something for up here. He quickly ran into his bathroom to brush his teeth.

Shivering slightly, he walked out of his room and came to an abrupt stop. Gray stood waiting for him. He also had thin sweatpants on and just a T-shirt, socks, and sneakers.

“What are we doing?” Seb asked in confusion.

Gray nodded to the door. “We’re going into your backyard.”

Seb blinked, half convinced his excellent lip-reading ability had suddenly stopped working. “Why?”

“Because I do tai chi. It’s excellent for balance, posture, and relaxation. You’re going to do it with me.”

Seb was sure he spent more time around this guy with his mouth hanging open than anything else. He was going to protest, but Gray was no longer looking at him. He was simply holding his door open. Tai chi? He’d heard of it, obviously, but wasn’t that some sort of martial art stuff? Like tae kwon do, defensive shit. Maybe his new bodyguard thought he ought to be able to protect himself. Seb followed Gray down the stairs. Yeah—he could actually get on board with that. Everyone treated him like he was delicate around here. He wouldn’t mind something a little different.

They walked through and out the kitchen door after Gray disabled the alarm. Gray seemed to know where he was going, so he must have been in here last night. He unbolted the big wooden door and stepped outside. Seb followed him and cringed as the icy temperatures hit him. “You know the dining room’s empty,” he said hopefully. Then he thought again as Gray glanced at him. “I could push back the furniture so we don’t break anything.”

Gray came to a stop. “Why would we break anything?” He looked genuinely puzzled.

Seb shrugged. “I guess when you jump me.”

Gray’s eyes narrowed. “I’m not going to jump you.”

“Well, maybe not, but I guess there’ll be hold positions, right? Maybe choking?” Seb put his arm up and tried to see if he thought he could get it around Gray’s neck like they did on TV. Gray wasn’t that much taller than him. He focused back on Gray’s face in case he missed any instruction to see Gray’s lips tilted in a half smile. Had he missed him saying something?

“You don’t have to worry about hurting me,” Seb assured him. “I’m stronger than I look.”

“Good to know,” Gray said and pointed to the grass. “Stand there.”

Seb obediently moved to about six feet away from Gray and turned to him expectantly. “What do I do?” he asked eagerly. “Do you want me to pretend I don’t see you?”

Gray tilted his head to the side, and Seb flushed nervously. He was excited. He probably mangled that question.

“Do you—” he started enunciating slowly.

“I’m not sure what you think is going to happen, but I want you to look at me. Stand with your feet apart and at about the same width as your shoulders and bend your knees.” Gray demonstrated. Seb copied him, a little worried he was going to ask Seb to do some advanced move he’d never seen. Should he tell Gray he was a beginner? Did Gray think Andrew had taught him to defend himself?

“Take a deep breath at the same time as you raise both arms to give your lungs room to expand.”

Seb copied, feeling a little silly to be honest, and shot a quick glance at the house.

Gray stopped, and Seb focused on him. “Concentrate on me,” he chided, and Seb flushed slightly. “Now when you breathe out, let both your arms come down, palms down as if you were going to touch your thighs.”

Seb did, then waited expectantly, but Gray just closed his eyes and repeated the movement. Seb waited a beat and then copied. Maybe this was some warm-up routine?

Seb took a deep breath in. The cold, crisp air felt kind of nice. His experience with the outside lately was just in between the car and whatever building he was coming out of or going into.

Gray nodded approvingly. “I’m going to turn around. I won’t speak, but I want you to be able to copy me. If I need you to listen I will touch your shoulder. As soon as you have the second move down just close your eyes. Don’t forget to breathe.”

Seb watched part astonished and part fascinated as Gray—who he was sure could kill him with his little finger—breathed and posed, well, like some kind of dancer, if that was even the right word. He repeated a second pose and then a third. It was one of the strangest things Seb had ever seen—completely incongruous on the big man—and Seb felt really silly for the first few minutes until he decided watching Gray and not doing it was just as lame, so he might as well. It was weird but after a few repetitions, Seb’s breathing seemed to get deeper and he relaxed into the monotony. It was probably the nearest he had ever gotten to sleeping while standing up. He was almost surprised when he felt the firm hand on his shoulder and opened his eyes.

Gray was smiling at him.

He took another deep, settling breath and smiled back, happy and oddly content.

“Perfect. We’ll go and get some breakfast now. I’ll expand our routine every morning.”

“That’s it?” Seb asked in surprise.

Gray nodded. “Tai chi is classed as a martial art, but I want you to use it for balance, relaxation, and posture. I think it might help your vertigo.” He shrugged. “It certainly won’t hurt.”

Seb was still struggling with the whole idea. “I thought you were teaching me what to do if someone attacks me.”

“But then what do I use for defense?”

Gray chuckled and held the kitchen door open. “Me.”