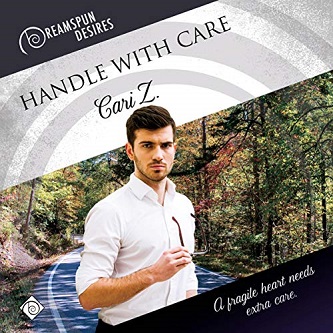 Burned-out social worker Aaron McCoy is on vacation for the first time in years – boss’ orders. Road-tripping to his brother’s wedding with his best friend, Tyler, seems a fun way to spend the mandatory two-week leave, and they set out for Kansas – and a difficult homecoming.

Aaron’s mother was a drug addict, and his adorable younger brother was quickly adopted, while Aaron spent his childhood in foster care. As Aaron mends fences, Tyler hopes to show him that this time, he won’t be left behind to face his problems alone.

Aaron’s opening up to how right it feels to be with Tyler and to the possibility of taking the leap from friends to lovers. But along with the wedding celebration comes a painful reminder of the past. Aaron’s heart is still breakable. Can he put it in Tyler’s hands?

Review: Handle With Care is a standalone novel from author Cari Z. The only previous experience I have had with Cari Z was actually reading this book. I was attracted to the book in the first place because it was a friends to lovers story, that also had a side helping of childhood demons. If that’s your thing, then I will say now that I recommend it to you. The only thing was that while I remember liking it, I didn’t love it.

And the narrator responsible for this is John Solo. Solo is one of my top narrators and is one I’ve been looking forward to listening to since when I first started listening to audios. He and Dorian Bane are my absolute favourite MM narrators. Solo’s performance was excellent and delivered the goods for everything that I had missed when I first read the book. Most importantly I felt the chemistry and the sexual tension between the two MCs was much more obvious in the audio.

The story is about Aaron McCoy. He is a social worker because he wants to help the kids who, like Aaron, were the impossible cases taken away from their primary caregiver(s) because they are in danger. Aaron has no love for his drug-taking mother and misses the little brother, Zach, who he had felt that he had been forced to leave behind after Zach was adopted. Aaron had a lot of issues and the parents who adopted Zach could not take Aaron, and while h has some issues concerning that he understands why. However, Aaron is close to burning out and so he has been forced to take a 2-week vacation from work.

The only other person who Aaron truly spends time with is his best friend Tyler. When Aaron left his home town and his little brother it was Tyler and his family who came to the rescue. Aaron still keeps them all at arm’s length, but these are people that consider Aaron family.

Tyler is a happy go lucky sort of bloke. He is a computer geek who can do most of his work on the road or at home. Knowing what Aaron is like he has the perfect solution for the 2-week holiday – Aaron’s baby brother is getting married and Aaron had been invited. Tyler not only forces Aaron to face up to his past and his brother, but also joins him on the road trip. They become closer as Zach and his family assume that the guys are a couple and as Aaron begins to tackle demons he had been too scared to face.

After such a fantastic audio, I have to admit that I only have one issue which I had initially had with the book that wasn’t resolved with the audio. Not that narration solves everything but the emotion the narrator gives often helps to smooth over the edges. My issue being that I thought that Aaron’s demons from being in the foster system still felt a little glossed over.

This story is one of the best examples where I can enjoy reading the story and then I listen to the audio and I am absolutely blown away by how wonderful the story is. The right narrator gives the characters and story so much depth.