Hi guys, we have Emme C. Taylor stopping by with her debut release He Dreams Magic, we have a great excerpt and a brilliant $10 NineStar GC giveaway so check out the post and enter the giveaway! ❤️ ~Pixie~ 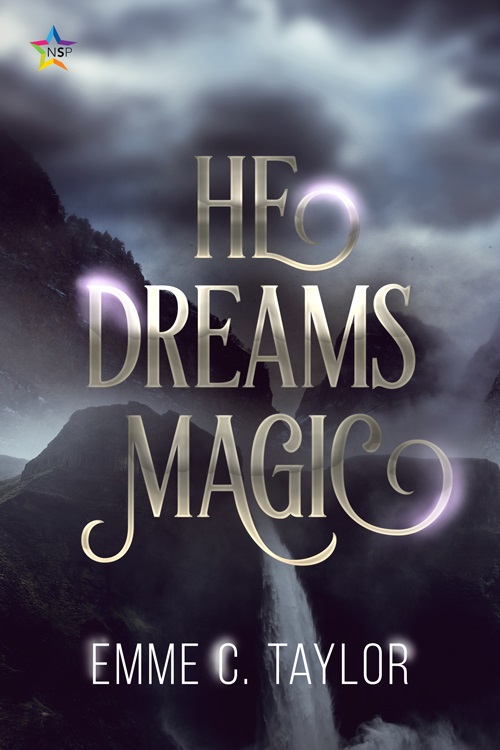 Ren has always wanted to leave, to escape his quiet village life. He wakes up from gold-tinged dreams with his heart pounding and a yearning for something he can’t name, can’t hold. He longs to experience something magical just once in his life.

Nico’s monsters don’t lurk under the bed. They walk in daylight. They haunt him every day of his life. He’s possibly the strongest magician of his time, yet he’s trapped. All he wants is an out.

At a magical carnival in the middle of a forest, Ren and Nico collide. They’ve been on this collision course their entire lives, always hurtling toward each other. For both men, escape is now. They have no choice but to flee together. Monsters and betrayal hunt them across strange lands. They find themselves on a journey to save each other—and possibly the world. All they have is one another, Nico’s magic, and a lifetime of half-remembered dreams. But finding each other, finally having someone to rely on, might be the strongest magic of all.

Warning: mention of off-page rape and depictions of graphic violence

The lake was on fire. Ren dipped his oars into the water and swept himself closer to the blaze, each stroke an exultation. He’d been waiting months for this, counting down the hot summer weeks to autumn and rain and flames.

He was ready to throw himself into the burn.

The fire came on time, as it did every year. The first rainstorm of autumn brought them down from the sky. Or so the story was told. Ren couldn’t quite bring himself to believe they rode through the skies on storm clouds and dropped to the ground between thunderclaps, stealing their impossible power from the lightning.

Then again, they were magicians. Anything was possible.

Ren’s village, Klein, lay huddled in the dark at his back. On the opposite shore, half the forest flickered red. The low clouds caught and held the glowing light from below. The spectacle could be seen from every village in the surrounding valley, a beacon: come, step into the heat, play with us, burn with us.

For the first time in his life, he was going to see it up close. From the quiet safety of Klein, the spectacle always gave the impression of a town set aflame. So near to it, it wasn’t like that at all. More like the whole world had ignited. His fingers around the wood paddles twitched with anticipation. This was it. Finally. Finally.

By the time Ren reached the middle of the lake, half of it alight, a bright crimson flared across the surface and leaped like waves in wind. Reflections set the rest of the lake ablaze so that it seemed to Ren he was sitting in the very middle of the conflagration. So far, he had avoided the areas of the lake that had caught flame.

Magic. God, yes. He could practically taste it in the air, and he wanted more of it. He’d dreamed of magic for years, a gold thread of it always in his mind’s eye. Since childhood, magic remained a ball of yearning lodged in his chest. Ren had to see it for himself. Touch it. Experience it. He wanted to drink it, have it sear his throat.

For years, he’d heard whispers of this from people in nearby villages, those who had gotten close to it over the years.

Those who’d walked through it—and come out on the other side.

Ren paused in the middle of the lake to take it all in. He would be seeing fire in his dreams that night.

His turn had come to walk into this wild world.

He dug his oars into the lake, his reflection rippling away from the boat with each stroke. Ren pushed himself closer to the ruby burn, a moth drawn to the dangerous lure of light. Emme C. Taylor can be found wandering stormy beaches with a pen and notebook in hand, waiting for inspiration or lightning to strike. She believes the atmospheric environment helps her to write the grittiest parts of her stories. Crochet and dark chocolate ease her mind when her characters aren’t cooperating. Emme will happily talk about almost anything to avoid having to talk about herself. How about this weather, huh?