Hi peeps! We have A.T. Brennan stopping by today with her new release Healing Him, we have a great excerpt and a fantastic giveaway so check out the post and enter the giveaway! <3 ~Pixie~ 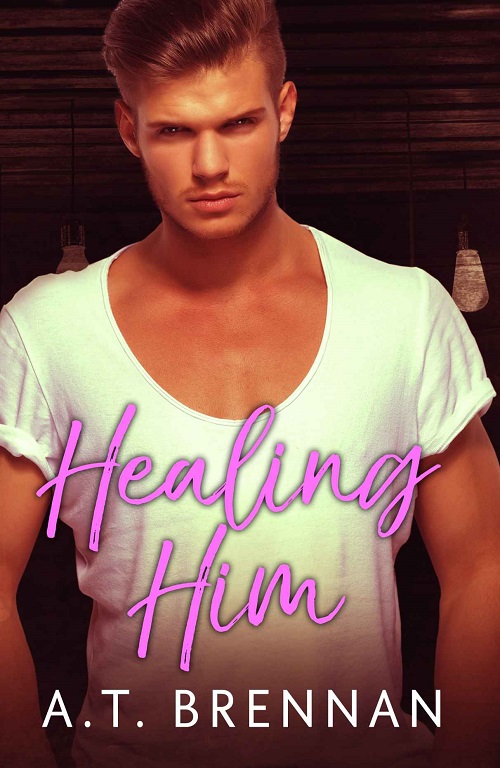 “I hated that I was like this, but after years of trying to work through it I was beginning to feel like I’d never be normal.” ~ Cody

Hiding the fact that I was in love with my best friend Isaac used to be the most complicated part of my day, until a chance meeting with a handsome stranger named Jonah sent my life into a tailspin. Scars from my past have stopped me from giving in to my desires for so long, but I’m done being afraid. I want both men. I just don’t know if I’ll be able to trust that anyone can love me.

“I knew it was a bit messed up, but there was no jealousy or envy when I thought of my men together.” ~ Isaac

I’ve loved Cody for as long as I’ve known him, but have always held back because of his past. Then I met Jonah and I knew there was no way I could choose between them. I want it all—the man I’ve loved for so long, and the one I’m quickly falling for. It’s not going to be easy, but nothing worthwhile ever is.

“I wanted to believe it was all true, but I couldn’t push aside the fear that I was just a distraction until the two of them got together.” ~ Jonah

After having my heart broken I never thought I’d find love again. I wasn’t looking for anything real, and then I met not one, but two men I can’t resist. Isaac and Cody are everything I ever wanted but didn’t know I could have. I want to believe the three of us can work, but a part of me can’t get past the fear that I’ll be the odd man out, again.

*This is Book 2 of The Den Boys series, but can be read as a standalone – no cliffhangers.

“So, start with Insidious?” I asked Cody as we flopped on his small couch.

“What? We’ve seen it so many times you should know when the freaky parts happen. I could have said I Spit On Your Grave.”

“That movie was messed up, not scary.” Cody shook his head and took the beer I held out to him. “I’m never watching that one again.”

“True, how about The Grudge?”

“Fine, but I swear to god, if you change my ringtone to that creepy moaning noise, I’ll never speak to you again.”

I grinned and opened my computer to cue up the movie. We might be able to joke about that incident now, but at the time it had been anything but funny.

The first time we’d watched it together we’d only been friends for about a month. I’d waited until Cody had fallen asleep then downloaded the moaning sound the demon character made as his ringtone. Then I’d snuck into the bathroom, blocked my number and called his phone. We’d been at my place that night, and he’d flipped out.

I’d felt terrible at how badly I’d scared him. I’d thought he’d get a good laugh out of it and that would be the end of things, but he’d been so freaked out he hadn’t been able to sleep for hours.

That was the night I’d learned a little bit about Cody’s past, and why he hadn’t handled the joke well. It wasn’t so much the ringtone that had scared him, it had been waking up in my bed alone, scared and disoriented.

It had taken a few more months for Cody to open up and tell me more about his past, and every time he told me something new my heart broke a little bit more for him. Even now I’d learn about something he hadn’t told me yet, and I’d wish I could take away his pain.

The more time I’d spent with Cody, the more I’d realized that he was an incredible person. He wasn’t just sweet and kind, he was caring and fiercely loyal. He was also beautiful.

At five-nine he wasn’t short, but with his slender build and cherubic face he seemed so much younger than twenty-one. His big blue eyes were wide and expressive. He wore his blond hair shaved close on the sides but long on top, so it was constantly falling over his forehead and brushing the tops of his cheeks if he didn’t continuously push it back. Everything about him was so beautiful it was almost painful, and it hadn’t taken me long to fall in love with him.

If he’d been any other guy I would have asked him out on a date, and gotten to know him as a romantic interest instead of as a friend. A.T. Brennan, who also writes under the name Mandie Mills, is a romance and erotica author. A native of Ottawa, Canada, she enjoys picking up and moving from city to city every few years. A former member of the Canadian Armed Forces, current entrepreneur and freelance writer, she enjoys spending her days working on her many projects and her nights writing and not getting enough sleep. Currently she lives on Canada’s East Coast with her family, both two- and four-legged. She enjoys collecting books and exploring the different sides of romance and romantic expression in her works.

You can visit her at www.mandiemillsauthor.com, or on Facebook at A.T. Brennan Author, and also at Author Mandie Mills.