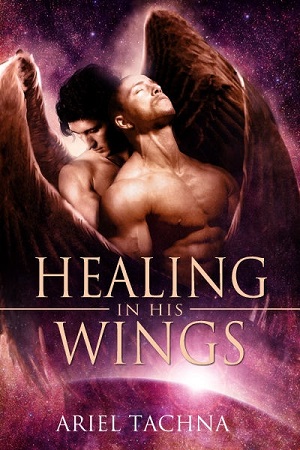 When the Starfire is struck by a mysterious and deadly plague, the captain and crew have no choice but to throw themselves on the mercy of the healers of a nearby, uncharted planet. First Officer Ryan Nelson accompanies the sickest patients to the planet’s surface, where he is put under the supervision of Juo-ta-ri, an apprentice to one of the healers who is helping the crew. The two have barely begun to explore the chemistry between them when Ryan’s body betrays him and he falls ill as well. Now it’s a race against time to see if Juo can bring the fever down before Ryan’s hallucinations kill him.

Review: The ship Ryan is on is struck by a deadly plague. They contact an unknown planet and ask for help. The angel beings on the planet agree to help and collect the sick to care for. Juo is a healer and takes Ryan in when he comes along with the sick. The two grow closer together but Ryan comes down with the plague.

While I liked the overall story I was honestly expecting more explanations about the disease and where it comes from plus the actual treatment of the crew but the story focused on Juo and Ryan. It felt more like a regular contemporary story to me.