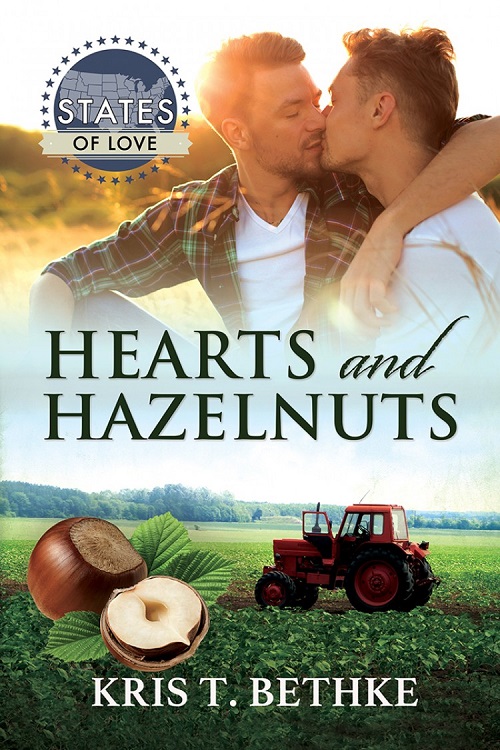 Mechanic Jordan Hart is down on his luck, so he gladly accepts a temporary job servicing tractors at a hazelnut farm in Newberg, Oregon. He doesn’t expect to be attracted to his boss, Beckett Shaw. Still working on embracing his bisexuality, he’s reluctant to start anything, but Beckett’s gentle coaxing convinces Jordan to take a risk.

Beckett has vowed not to get involved with anyone until he can restore the Shaw Farms name as a leader in hazelnuts. But there’s no denying his interest in the shy mechanic who shows up at his door. Just as they begin to find a balance, outside forces threaten to tear them apart. Job opportunities force Jordan out of the Portland area he loves so much. But when danger comes too close to Beckett, Jordan must decide if he can follow his heart to the Willamette Valley… and straight back to Beckett.

Hi, I’m Kris T. Bethke, and a great big thanks for hosting me today!

Inspiration is key when writing a story, and I had the best possible inspiration when writing Hearts and Hazelnuts. Oregon. This state is amazing, rich with culture, a beautiful mix of rural and bustling cities. And hazelnut farms in the lush Willamette Valley.

Anyone who knows me knows I love to write to sub calls. And the States of Love Collection was a siren song to me. But it was so popular, I didn’t get in on the first round. Fortunately for me, some ten months later, Oregon came up again. And I knew what I wanted to write about. I had the characters in my head, I just needed to find their story.

Beckett Shaw, and Shaw Hazelnut farm, was born from research. Once I started looking into hazelnut farming, I fell into a rabbit hole of research. I watched videos, read articles, and scoured websites. For a week, it consumed my free time. Not all of this information made it into the book, but it gave me a solid background from which to start. It also made it easy to understand Beck’s motivation and viewpoint.

And then I got to spend all my time visualizing Oregon, all the amazing sites and try to figure out what made the state and the Portland area in particular, special. I barely scratched the surface in this novella, but it was fun to pick and choose certain aspects to try to bring the state to life on the page. It really is another character in the book.

I loved writing this book. I love the characters and their story arc. And setting it in Oregon, bringing the state to life, gave it something extra special. So join Beck and Jordan as they fall in love on an Oregon hazelnut farm. THE SUN crept over the horizon, washing the room in watery light. Jordan Hart had already been up for more than an hour, and his eyes crossed as he stared at the computer screen. There was not enough coffee in the world to make his brain function well enough for this, but he had no choice. He needed a job, and that meant scouring the postings. Something somewhere had to pan out.

He worked with his hands. Computers were not his strong suit.

Jordan blew out a breath, stood up, and crossed to the kitchen to pour more coffee. Three months before, he’d been living on the northeast side of Portland and making enough money to live comfortably. Working on cars all day, enjoying a beer with friends at night, he’d been happy. Well content, if not exactly happy. And then, from one moment to the next, everything went to shit.

No one knew that the general manager had been craftily embezzling profits for more than a decade. Jordan certainly hadn’t. He’d come in, worked his shift, and collected a pay check. But despite servicing everything from late-model sedans to high-end sports cars, the shop wasn’t making much of a profit. And when the absentee owner finally looked into the financials… well, Jordan was employed one day and jobless the next.

It sucked because he liked the shop, and he loved the work.

Things went downhill from there. When he failed to find a job within the first few weeks, he had to dip into his savings to pay rent. He didn’t have enough to sustain himself for long. With no employment prospects, Jordan had to give up his apartment.

Moving in with his brother was a blow, but Jordan reminded himself that it was only temporary. At least John was a good guy and didn’t treat Jordan as though losing his job were somehow his fault. Since their parents were gone, the brothers were close and they always had each other’s backs. John had even tried to get him a job at the Massey Ferguson dealership where he was the service manager. Working on big, diesel engines was Jordan’s first and truest love. But there were no openings, at least not for a permanent position. Jordan filled in a few days, but that was it.

Coffee in hand, Jordan sat back down in front of the computer. He’d expanded his search past the Pacific Northwest, and it looked like he’d have to move if he wanted to find a job that used all his skills. Jordan was certified to work on just about every kind of engine, something he took pride in. The classes required long hours of hard work. They’d also been worth every penny, every curse, every drop of sweat and blood.

Jordan didn’t want to leave Oregon. He couldn’t imagine it. It went beyond just the perfect weather—four distinct seasons without prolonged temperature extremes—though that was a big draw. It was the place he’d grown up, and he was proud to be an Oregon native, through and through.

The ring of his cell phone broke the quiet in the room, and Jordan snatched it up, grateful for the interruption. He was even gladder when he saw his brother’s name on the screen. There could only be one reason John was calling so early in the morning.

Thank God. “Yeah? You need me to come in?” Jordan stood and headed toward his tiny bedroom so he could dress.

“Sorry, man.” John sounded apologetic. “But it’s a day thing. One of the farmers out in Newberg needs service, and my guys are swamped. Beckett is desperate because he’s supposed to harvest today. I told him about you, and he’s willing to have you come out.” John sighed. “I know it’s not much, but Beck’s a good guy and he’ll pay you fair. And a day’s work is better than nothing, right?”

“I know, kid. I’m sorry.” Another quick breath. “Okay. I’ll text you the address. Get out there as soon as you can.”

“I’ll be on the road in a couple of minutes,” Jordan assured him.

Jordan dressed, poured his coffee into a travel mug, checked his tools, and climbed into his truck. One of the best investments he’d made was his expansive set of Proto tools. He kept them in a triple-locked tool chest attached to the bed of his Silverado.

The drive to Newberg only took about forty-five minutes, and once he cleared the area surrounding Portland, I-5 was fairly deserted. He set the cruise control at only five miles over the speed limit. That was not the day to get pulled over for speeding.

Jordan had traveled his fair share, but there was something about the Willamette Valley that just took his breath away—rolling hills in verdant green, stately trees, clean, crisp air. Autumn was his favorite season to begin with, but he especially felt it there. Though only a quick trip south on the highway, Newberg felt a world away from the city life of Portland. Jordan was always surprised by how much he liked the feeling. He was a city boy. But there was something amazing about leaving the city behind and being surrounded by the unspoiled farmland of the lush valley.

The GPS on his cell directed him to turn off the highway just before the town itself, and he followed a side road for about a mile. As he rounded a curve, a large wooden sign came into view. It looked a little weathered, but the paint was bright, and an artist’s rendition of a hazelnut graced the upper left corner above the writing.

Hazelnuts. Of course. Jordan should have guessed, considering where he was. The heart of hazelnut country. The Willamette Valley was some of the most fertile land in the state, and there were hundreds of hazelnut farms. It was Oregon’s largest crop and what the area was known for.

Jordan eased the truck into the turn and followed the drive through a copse of oaks that suddenly opened up to a flat expanse. A house sat on the left, and several outbuildings and a barn stood on the right. And straight ahead were unmistakable row upon neat row of hazelnut trees. Jordan reduced his speed further and looked for a clue to where he was supposed to go. The third building had two huge bay doors. It looked promising, so Jordan eased the truck into the small concrete lot in front of it. He shut off the engine and stepped out of the truck just as a side door opened. A man strode purposefully toward him.

From a young age, Jordan had known he was bisexual, so his attraction to the tall, broad, dark-haired man wasn’t entirely a surprise. The guy was dressed in a light gray, long-sleeved T-shirt, worn, well-fitting jeans, and work boots. Jordan took a minute to just enjoy looking while doing his best not to outright leer. Then he reined in his libido and sent a silent prayer that the man was not Beckett Shaw. It wouldn’t be good to perv on the boss, even on a short-term job.

“Jordan?” the man asked when he was close enough not to have to shout. He held out his hand. “Thanks for coming. I’m Beckett Shaw.”