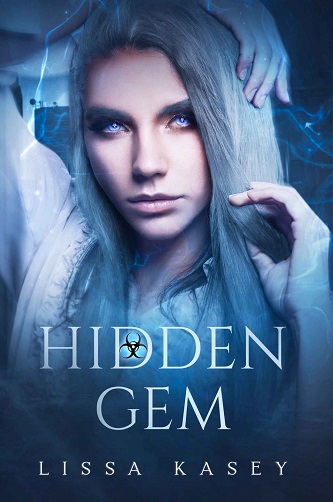 Blurb: The sparkling jewel of the Hidden Gem, City M’s most renowned brothel, Misaki “Aki” Ito is living the good life. He’s not subjected to torture for his psi abilities, he has a roof over his head, food to eat, and all the sparkly shoes he could dream about. He also has one particular regular he can’t get enough of, Shane McNaughton, even if Shane occasionally asks for Aki’s help on a case.

Shane is a cop specializing in missing persons. He’s good at finding people, not just because of his years as a seasoned detective, but because he survived the Third World War and resulting plague with a few supernatural abilities himself. Mutated by the virus that wiped out two thirds of the world’s population, Shane no longer considers himself human. Which is why he limits his visits to a very breakable psi companion when not working a case, no matter how much he might want Aki.

When a high ranking official’s daughter goes missing and feared dead, Shane has no choice but to ask Aki to use his abilities to help him track down the kidnapper. The case opens a door to a past Aki thought he had escaped. Will Shane’s love be enough to save them all when something dark is awakened inside of Aki?

Note: Re-edited, but content still the same. Short fiction added to the end.

Review: Aki is a psi; he has mutated DNA that means he is able to read your past with a touch, but living in a world that fears those that are different left him starving and beaten until he was taken off the streets to become a contracted companion. The Hidden Gem welcomed him with open arms and he has repaid them by becoming their top companion, earning enough money to keep him in sparkly shoes and pretty clothes. Shane survived the Third World War greatly changed; now working as a cop finding missing people and assisting in the odd homicide but keeping people at arm’s length to hide the monster inside him. Shane has visited Aki many times over the last two years for both work and personal needs and he wishes he could have more from the companion. As Shane tracks down a serial killer it becomes clear to him that Ari is somehow connected, but can Shane save him from what is to come?

Oh my, this story certainly surprised me with the intriguing plot and stunning characters. The world has changed from what we know; World War Three changed not only the landscape but for some it changed their very genetics, A-Ms (Animal-Mutation) and not long after came the psi’s. A country split and containment camps and shunning for the psi and A-Ms hiding their natures, this is the world we find ourselves in and it is fascinating. Shane is investigating a puzzling serial killer, asking Aki to help seems to be his best bet for any clue but not even Aki could have seen the outcome that they are heading for.

Shane and Aki are wonderful characters, Shane may be big, growly and not very friendly and when you learn his past you can understand his stand-offish attitude, but he has a soft spot for Aki, then there’s Aki who seems to be a young innocent who has an obsession with sparkly shoes, but has an horrific past and it’s amazing after everything he has been through that he has a soft heart for Shane. They have much to work out before they even start dating, Aki must learn to shield himself and Shane must learn to be what Aki needs and Shane also needs to get to the bottom of his serial killer case which seems to get bigger and more complex with every victim.

I have to admit that I couldn’t put this story down, it’s growth was amazing with plots and twists that just seemed to get bigger and bigger, there was also a couple of moments where my jaw dropped in surprise because the twist just came from nowhere. We are treated to a host of wonderful characters besides Aki and Shane; some of those include Candy, Paris and Jack. We are led a merry chase as we try to figure out who the serial killer is, and just where Aki fits in to Shane’s feeling that he might be connected…. And I will tell you now I think I was shell-shocked by the revelation because that had never even crossed my mind!

The two bonus stories are absolutely brilliant, giving us a special glimpse of Aki and Shane in the first one and of Aki and Candy in the second.

I have to recommend this to those who love science-fiction that blends with the paranormal, who love unconventional love stories, who love surprising thrillers and mysteries, fantastic characters who all have their own stories and a rollercoaster ride that you don’t want to get off.