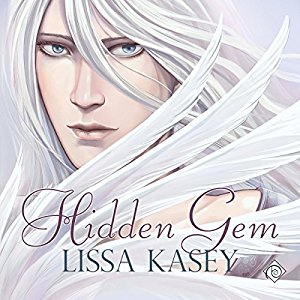 Blurb: Misaki “Aki” Itou is a psi – a person with mutated DNA granting him psychic abilities. He’s also a contracted companion – a whore. It may not be the perfect profession, but having a roof over his head, food to eat, and not being subjected to torture is a dream come true. He is the top companion at the Hidden Gem, and it makes him enough money to buy the prettiest, most sparkly shoes he can find.

Shane McNaughton is an Irishman who survived the Third World War and works as a cop. As head of Missing Persons, he’s good at finding people, but after the plague mutated his DNA, he has a hard time letting anyone see the monster inside. He’s been paying for Aki’s services for two years, both the psi and the sexual kind, but he wants more from the companion.

Shane needs Aki’s ability to see into another person’s past to track down a serial killer murdering the children of rich and powerful men, but the more they work together, the clearer it becomes that they are linked through a darker past than either of them realizes.

Review: An alternative reality, where society has gone through World War II and the US is divided into North and South, with scientists experimenting on human DNA to create clones, and super soldiers, concentration camps, and many societal horrors are the backdrop for an unusual romance.

Each character is fascinating in a way only sci-fi can make them. Aki feels safe in his home, The Hidden Gem, working as a high end prostitute/companion. Sure beats living on the streets, starving, abused and rejected without much of a glimmer in his memory of his true past. Not only does he now live a plush, protected life, as a companion Aki is limited to oral sex and hand jobs because he can’t touch or be touched without a barrier due to his sci ability. But that’s also something he desperately craves, the companionable touch of a lover, Shane in particular.

There are so many characters, and each one piques my curiosity, especially Paris, but I think that’s a whole new book. Candy is one of my favorites, because each MC needs a bestie. The different characters including the owners of the Hidden Gem, and the investigators, and people from Aki’s past all have so much more to mine…lots of back story and so much possibility. I feel like I’ve barely scratched the surface of the support characters.

On top of Aki’s drive to control his mutant abilities, he has to confront and understand his past, so that he no longer needs to live in fear of the future….one he hopes can involve a certain strong, sexy Irish detective.

The narration is really good, sometimes the distinctions feel over the top, but it makes each character very clear and I love that. The sexual content is hot, right up until…..well. I’ll save that surprise. I can’t really tell a lot more about this book without dropping so many spoilers.

If you love a little mystery, action, and science fiction with your MM romance, you’ll love Hidden Gem!