Hi guys! We have Marshall Thornton popping in today with the tour for his new release Hidden Treasures, we have a great excerpt, a brilliant giveaway and Shorty’s review, so check out the post and enter that giveaway! <3 ~Pixie~ 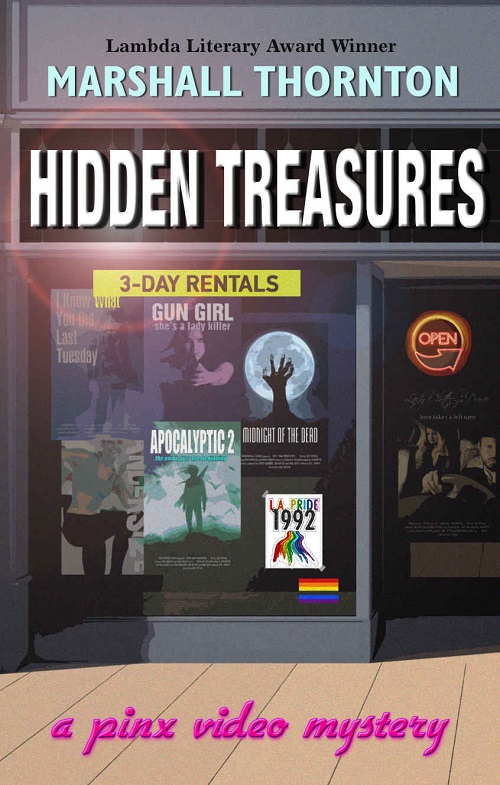 It’s about a dress. A valuable blue sequined dress worn by a famed actress in a film from the 1940s. For some reason everyone thinks video store owner Noah Valentine has it. Which might not be a big deal except that it’s connected to the murder of a prominent Hollywood costumer.

In the second of the Pinx Video Mysteries, Noah attempts to solve the mystery of the dress. To do so, he must confront a legendary film icon Wilma Wanderly, hunky police Detective Javier O’Shea, the dowager Queen of Watts and a couple of bitter ex-friends.

“ABSOLUTELY NOT,” I insisted.

It was a Thursday night, my regular night to have dinner with my downstairs neighbors, Marc and Louis. I sometimes had dinner with them on Sundays or Tuesdays or Fridays as well, but that was dependent on everyone’s schedule. Thursday was the night we marked down in our Day Runners.

“Oh come on, it’ll be fun,” their friend Leon said. He was just past forty and liked to dye his spiky hair whiteblond.

“You’re not the one who ended up hanging off a balcony,” I pointed out, sipping a cup of coffee that was more cream and amaretto than coffee. I should have told Louis to hold the amaretto. And the cream. And probably the coffee.

“I’m sure that won’t happen again,” Leon said. “How about we put a prohibition on tall buildings?”

“How about we put a prohibition on amateur homicide investigations?”

“Well, I want to know,” Marc said. “Who’s this person who got himself murdered?”

I was tempted to stick my fingers in my ears and sing “lalalalala” so I didn’t have to listen. Instead, I looked up at the starless night. Well, it wasn’t really starless. The stars were there, it was just that you couldn’t see them from Silver Lake—or anywhere else in Los Angeles— since there was always too much light pollution at night. It never really got dark enough to see stars.

“…costume house over on Santa Monica and Mariposa…”

Maybe I should hum. That might block them out. We were sitting in the courtyard of our six-unit, L-shaped, stucco apartment building. It had been painted a stormy gray with bright white trim around the windows and on the railings. The courtyard was crowded with very old plants and we sat under a giant bird-of-paradise that was probably planted there during the Korean War when the building was built. An iron table sat outside Marc and Louis’ apartment, so they’d commandeered it on a permanent basis.

“What do you think, Noah?” Louis asked.

“About the costumer who was murdered.”

“No one has a butler anymore,” Marc said.

“Then I have no idea who killed him.”

“Ha-ha,” Leon said to my joke. Then he went on, “Everyone at the studio is in an uproar. He supplied costumes for nearly half our shows.”

“What exactly is a costume house?” Louis asked.

“They collect costumes,” I explained. “They’re usually headed by a designer, so they make some of the costumes as well.”

“It’s not collecting like you do with coins or stamps. Although, I guess people do that, too. This is more like Hertz, except for costumes.” I was getting a blank stare, so I continued. “Say you’re working on a show like Gunsmoke—”

“No, it’s not. Anyway, on a show like that you have to dress all the background people. So you charge the studio whatever it costs to make or buy the costumes for the extras. Then you rent them out to the next Western that comes along and that’s where you make your profit.”

Why was I explaining this? I was better off looking at the sky.

“Well…” I stood up. “It’s time for me to go upstairs. Everything was delicious, Louis.”

“Let me make up a plate for you,” he said, jumping up.

“Yes, I do!” he called out, already running into the kitchen.

Louis’ dinner had been delicious. It was just that delicious had become a more abstract concept than it had once been. It used to mean food that was so good it could not be resisted. Now it was simply something I knew about food, even as I pushed it away.

“Apparently, the police think it was a burglary gone wrong, but they can’t find anything missing,” Leon said to Marc.

I walked over to the foot of the stairs that led up to the second floor. I did not want to get pulled into their discussion. I’d had enough of people being murdered and wanted nothing to do with it ever, ever again.

Marshall Thornton is known for the Lambda Award-winning Boystown Mysteries. His comedic novels include The Ghost Slept Over, My Favorite Uncle and the Lambda Finalist for Gay Romance, Femme. Marshall holds an MFA in Screenwriting from UCLA and has had plays produced in both Chicago and Los Angeles and stories published in The James White Reviewand Frontier Magazine. Win an Ebook of Night Drop (A Pinx Video Mystery #1)! 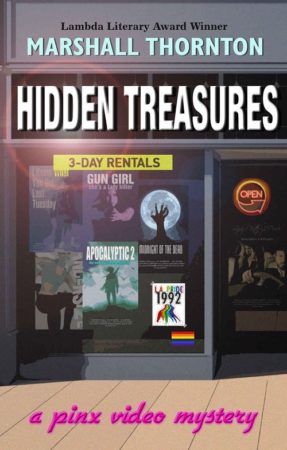 Blurb: It’s about a dress. A valuable blue sequined dress worn by a famed actress in a film from the 1940s. For some reason everyone thinks video storeowner Noah Valentine has it. Which might not be a big deal except that it’s connected to the murder of a prominent Hollywood costumer.

In the second of the Pinx Video Mysteries, Noah attempts to solve the mystery of the dress. To do so, he must confront a legendary film icon Wilma Wanderly, hunky police Detective Javier O’Shea, the dowager Queen of Watts and a couple of bitter ex-friends.

Review: After his ex lover’s death Noah is asked by his former lover’s family to find the collection, which actually a dress worn in a nineteen forties movie. But alas nothing can be that simple and Noah is not the only one looking for the dress. The people who are also looking for it want it no matter cost.

Along with his friends Noah starts the hunt. Along the way he meets Detective O’Shea. I really liked that this story had several aspects to it.You have the mystery of the dress and Noah’s personal life. The story was well written and draws you in.

The overall feeling of this book is one of mystery and drama. Noah’s life is not hearts and roses as he struggles with different issues. The mystery of the story is amazing. I liked the details and the way everything flowed seamlessly.