Hi peeps! We have J.S. Harker popping in today with her upcoming release His Fairy Prince, we have a brilliant exclusive excerpt so check out the post and enjoy! ❤️ ~Pixie~ 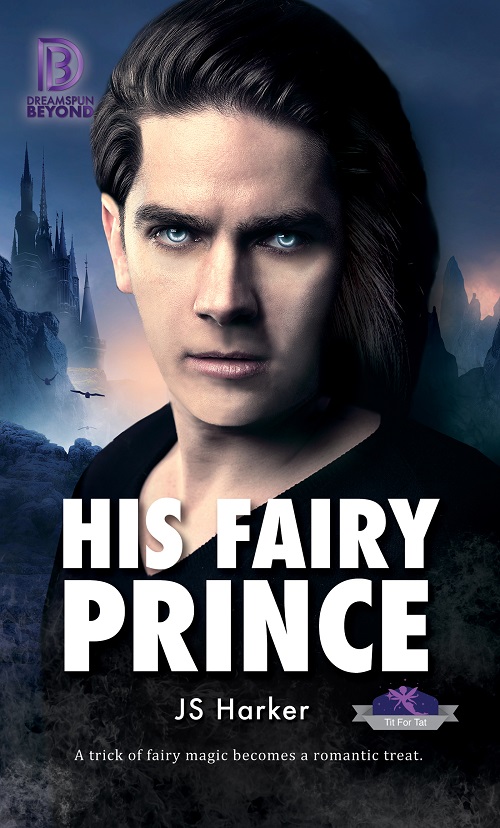 A trick of fairy magic becomes a romantic treat.

Halloween is fantasy-loving college senior Greg’s favorite holiday, and he’s thrilled to explore a spooky puzzle—even if his friends prefer slashers over witchcraft. Luckily the gorgeous and otherworldly Alaric wants to sneak time alone with him. Unluckily Greg’s sworn off hookups. Still reeling from an intoxicating kiss, Greg opens a secret door…

Alaric kicked his feet up onto the desk in the observation room, pulled his tablet into his lap, and bit into an apple. His boots landed with a solid thud, and the apple made a satisfying crunch. He enjoyed the reality of sound in the mortal realm. Back in the kingdom, sounds were muted. Great for sneaking up on unsuspecting pixies or goblins but terrible for slamming a door to make a point.

In the human world, Alaric didn’t need a spell to amplify his voice to carry across a distance, and he had to watch how loudly he shut a door. He tended to thunder around the building, sometimes just for the thrill of making noise. Eating one of Lady Ulla’s apples had a double bonus. He made plenty of unnecessary noise, and the trace amount of magic in the apple made him feel better. Living in the mortal world could be a real drain on his magic.

Raven subtly shot him a glare. She preferred moving as silent as a whisper and complained frequently about noise when Alaric did more than breathe softly. The crinkle of a plastic wrapper or the scraping of a chair across the floor could be too much for her. She tolerated Alaric’s noise because they’d been friends since they were younglings—a relationship lasting for centuries, in human time—and because Alaric was the prince.

Still, her nostrils flared as she turned her attention to her sketch.

Alaric took his next bite more quietly. Next year she would be in charge of the escape rooms. He would stay on for a year, maybe two, to help her grow accustomed to running a business in the mortal world during the Halloween season. She needed to get used to noise, but he couldn’t push her too hard either.

He toyed with his silver signet ring. It bore the crest of his family, an image of a skull wreathed in ivy. Two hundred years in and out hardly seemed enough, but his mother wanted to retire her crown, and he had a duty to take on the role of ruler. Soon the kingdom would test him, and he would bond with it until he handed over his crown to his successor.

Without siblings, without much in the way of even cousins, he would have little help ruling the kingdom. The burden would fall on him, and he didn’t foresee his mother hanging around until the end of time. What he needed was a consort, but finding a worthy one was a challenge.

Alaric tapped his silver ring against the armrest of his chair as he watched the humans’ progress in the axe murderer room on his tablet. There was something about Gregory Patterson—Greg, as one of his friends called him—that intrigued Alaric. Not many in the college crowd booked the Witches’ Spell, preferring the gore and murder of other rooms. Greg seemed genuinely disappointed when his friends made him switch to a different experience.

Now he stood in the corner of the room, biting his lip and glaring at the others. He had started out trying to solve it, but the other three dismissed him more harshly than Alaric’s mother got rid of particularly noisy Summer fey.

“Could you stop that?” Raven snapped.

Alaric frowned, then realized she meant the tapping. He held his hand up and away from the armrest. After swallowing his bite of apple, he said, “I was distracted.”

Raven flicked her gaze up to the six monitors across their two desks. Each monitor focused on a room, while the sixth viewed the lobby. “Which one?”

Raven scrutinized Greg for a moment. She gave a one- shoulder shrug. “Scrawny, especially by human standards. Why did he capture your attention?”

“There’s something special about him,” Alaric mused.

“Oh no.” Raven put down her pencil and paper and twisted her chair to face him. She bore a skeptical expression. “Special?”

The pointed tips of Alaric’s ears burned. “I am not making it up. He’s different. He called the photo of the kingdom enchanting.”

“Mm, I saw that. He was flirting, Alaric. And he’s human. He could have lied. How can you trust what he said?”

“You didn’t see the uncertainty lurking in his eyes.” Alaric wished he had another camera in the Axe Room so he could see Greg’s brown eyes. “Under the surface of his flirting, he’s searching. And he didn’t call the kingdom spooky or boring. He was interested.”

“Let me guess, you want to rescue him? Take him on a grand adventure and show him what an amazing man you are?” Raven asked.

Alaric dropped his feet from the desk, tossed down the remainder of his apple, and turned to face her. “You’re mocking your prince.”

“I’m mocking foolish behavior. You act like you can solve any problem.”

“Is that such a bad thing?” Alaric asked.

JS Harker loves stories. She was one of those kids who always had a book in her hands and spent many hours adventuring with her siblings. These days she wanders into her imaginary worlds and conjures up tales of magic, passion, and happily-ever-afters. She currently lives in the part of the Midwest that makes Tatooine look interesting by comparison (not that she’s ever obsessively thought about becoming a Jedi or anything).