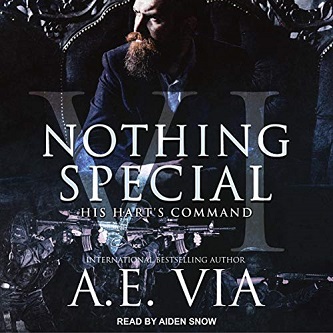 Blurb: Lennox Freeman (Free) is one of the best hackers in the world which has caused him to spend most of his life on the run. Never able to put down roots, he couldn’t trust anyone not to take advantage of him, even his own family.

Review: His Hart’s Command is the sixth book in A.E. Via’s fantastic series, Nothing Special, which follows the love lives and the action at work of the elite Atlanta PD drug taskforce led by Lieutenants God and Day.

His Hart’s Command continues with the same intensity and tone as the five previous books in the series. It’s seamless transition between books and Via has this wonderful knack to mix hot, steamy sexual attraction with a complex storyline. I find every minute – either as an audio or on page – compelling and interesting. While it’s impossible for me to relate to tough alpha males who work in a high stakes, possibly deadly line of work, I love that they also feel like they aren’t extraordinary human wonders that no one could possibly understand. I love that this series doesn’t forget the guys who we’ve already seen find the love of their lives, because we get to see that they are human and that even down the track these are still have their own issues cropping up from time to time.

Aiden Snow, who has performed the narration for the entire series so far, continues a fantastic job and really just completes the job of getting me engrossed in the world of the guys on God and Day’s team. Snow’s voice suits the action and the passion throughout the book, as well as hitting the emotions and uncertainty. The part that has me in awe the most is how Snow has managed to give all the characters in this series their own voices and portrays them so well. After all, just because the guys in the previous books found their men doesn’t mean that we don’t see them all the time in subsequent books and continue to see more of their stories.

His Hart’s Command starts with Lennox Freeman (aka Free). He got onto Day and God’s team with a brief introduction in book 5, he’s one of the best hackers around and his skills has landed him in trouble, so much so he’s always struggled to make roots from himself. Until now that is, now that he has been invited to be God and Day’s team’s technical eyes and ears when his friend (and the team’s previous hacker) became a field cop. Free is getting comfortable in his new life and there is one man that has him intrigued, Ivan Hart.

Ivan is the leader of the SWAT team who is more often than not providing back up for God’s and Day’s team. He loves his job. It is perhaps his greatest passion. He prides himself on his expertise. Meanwhile his personal life is in disarray. He is recently divorced and since the end of his marriage he has thrown even more of himself into his job. But things change when Free join’s God and Day’s team. Free challenges Hart’s every day normal but there is a strong current of attraction between them. With issues arising God and Day and their team seeming to take unnecessary risks, romance between these guys appears to be something that could cause a lot of issues amongst the drug taskforce and the SWAT.

As I said earlier, this is a wonderful series. It’s amazing and I can’t stop gushing about how much I love it. If you’ve not read the previous books you should go back to the start as there is a lot of overarching and interconnecting storylines. Those that love some action and danger and men in uniform with their romance will definitely dig this series.