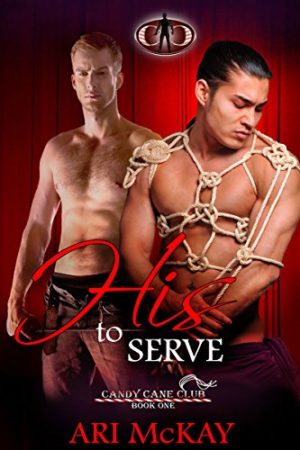 Title: His to Serve

Blurb: Cameron Ward is an actor from Atlanta. After a stint in New York, he returns home to find work in Georgia’s growing film and TV industry. He lands a lead role in a film, playing a submissive, but he doesn’t know anything about the lifestyle. Wanting to make sure his portrayal is believable, Cameron goes to the Candy Cane Club, a BDSM dungeon, where he meets Anton Albright, a Dom. Cameron loosens up enough to do a scene with Anton, but he discovers a side of himself he’d never suspected. But Cameron had enough difficulty coming out as gay, and he’s not ready to admit he’s a submissive as well.

Dr. Anton Albright has a reputation for being good with new subs. What he’d really like, though, is a sub of his own. Cameron is the kind of man Anton wants, and once Cameron accepts his need to serve — and, especially, to serve Anton — they explore the possibilities of a relationship that will give them both everything they want and need.

But when fame comes calling at Cameron’s door, their private, intimate world is threatened. Anton’s medical practice won’t survive his private life being held up to public display, and Cameron finds it difficult to adjust to extended periods away from his Sir. Can they find a compromise that will make them both happy, or will Cameron’s rising star force him to leave Anton behind?

Master Anton is a Dom whose patient and friendly. From the moment these two meet they are attracted to each other. I liked the way Anton described what to expect in certain scenes. He never pushed Cameron in the least and gave him time to think through and accept or decline.