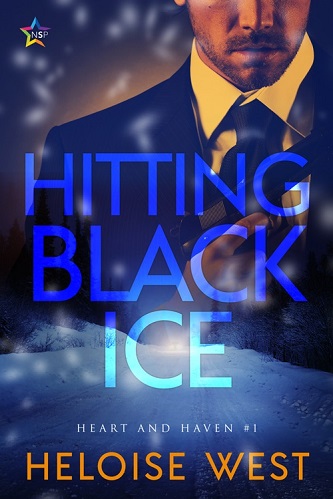 Blurb: Shawn is on the run from the law and love, to protect himself and anyone else involved. Until he meets Hunter, and he no longer wants to run.

ER physician’s assistant Hunter guards his heart carefully, but that doesn’t stop him from falling for the temp front desk clerk. He keeps his distance from relationships for a good reason but just can’t help himself when it comes to Shawn.

Forced into a hostage situation, buried passions explode in the aftermath, and sex in the supply closet brings both their hearts back to life. But as they explore their relationship, the past catches up with Shawn.

FBI agent Nick Truman has finally found his man, and when Shawn escapes, he focuses his attention on Hunter. Will Shawn sacrifice himself to save Hunter from the man who framed him for murder?.

Review: Hunter is a physician’s assistant at a hospital in the rough part of the city, he has avoided entanglement with men for the past several months for a very good reason but the front desk clerk, Shawn, has managed to crack Hunter’s shell and draw his interest. Shawn is on the run, he’s hiding from the law to protect himself and those he loves he can’t get involved with anyone but Hunter appeals to him in a way no one has before. Their attraction to each other explodes after a tense hostage situation, and no longer able to deny his passion Shawn can no longer rebuff Hunter. Just as things are looking up Shawn’s past explodes into the present, and Shawn has a choice to make: continue to run or protect his lover from the man who framed him for murder.

Hmmm this is a great suspense/thriller with a good dose of passion and a dash of romance. Hunter has had a hard year, his last relationship ended in violence and his guilty feelings are eating away at him. He’s avoided having his heart engaged by sticking to one night stands and booty calls but it hasn’t stopped him from becoming enthralled with the front desk clerk at the hospital where he works.

Shawn has avoided getting close to anyone while he has been on the run, getting involved with Hunter is not an option but the fear and adrenalin after being held hostage has the passion between them exploding. One encounter is not enough and Shawn keeps going back for more until his past catches up with him and the eyes of a killer are drawn to Hunter.

I have to admit that as I started reading this story that I wasn’t sure what to expect, we are initially led to believe that Shawn is already in a relationship so I was wary of continuing but I am glad that I stuck with it as what we initially learn is later disabused with the truth. Hunter is a great character whose caring heart has him wanting to help even when things look dour, Shawn is a great man who has fallen foul of some unscrupulous men, he’s running for his life and he may be under the radar but he sticks to legit means to do it.

Their passion is explosive and even as Shawn tries to back away he just can’t. Their relationship is very quick to start after a lot of dancing around each other, and you can tell that they both want more than just a series of one night stands. Their relationship is only just beginning even as the story ends so we just might get another story out of this great couple.

The actual storyline is pretty gripping as we are very slowly fed Shawn’s story with tidbits of information, and we discover it all in the shape of a letter written to Hunter explaining everything. As you can guess the story is from Hunter’s view point but you can fully imagine by Shawn’s actions the pure fear and hopelessness of his situation. There’s plenty of action littered throughout the book and I’m not even gonna comment on the bad guys except to say that a fiery pit in hell is too good for them. This really is a great suspense/thriller, it’s well written and while there’s a romance it isn’t a sweet building one, it’s one that is built during fraught times so don’t expect it to follow normal guidelines of relationships, it starts with sex and secrets and we have no clue which way it will go as we are led down a well-crafted story.

I have to recommend this to those who love thrillers and suspense, who love relationships being embarked on during difficult times, who love action and danger, who love gripping stories of men done wrong and love man who will do anything for the men they are coming to love.