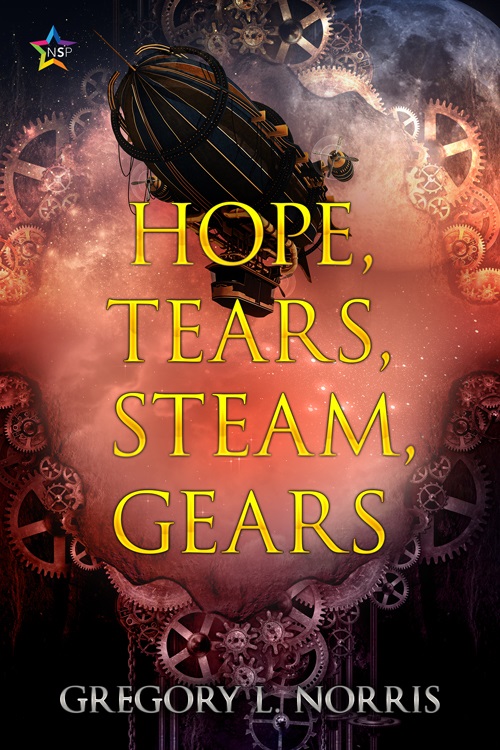 I fell in love with him on that lost afternoon, a day that now seems part of another life and time. At the Earl of Kensington’s request, I headed to the planetarium to hear Richard Sandominus Flynn deliver a lecture to a full house of eager learners and free thinkers. Most of those assembled were students from university, steam workers, and members of Parliament. As the earl’s ward—a punishment for past petty crimes more than a chance at redemption, I was convinced—I sensed I didn’t belong and planned an early escape. Perhaps to the botanical gardens. I always loved it there.

But soon the lights dimmed, and I settled against the faded red velvet seat, and my life forever changed. Overhead, stunning images washed over the smooth curves of the mother-of-pearl ceiling. The moon was first, its familiar cratered face easy to recognize. Only I had never seen the Earth’s nearest neighbor presented in such detail. Other celestial bodies followed. One, rust-red with what I assumed were polar ice caps, could only be the planet named for the god of war. A comet, in stunning clarity. The planet Jupiter. A constellation of stars.

“What you are seeing,” said a man’s commanding voice that drew my eyes reluctantly down from the heavens and to the lectern on the small stage, “are photographic images of the universe that surrounds us.”

Equally as breathtaking as the voluptuously full moon above him was the man. Tall, with dark hair and a trim beard, his face was the handsomest I’d ever beheld. His gentleman’s shirt, coat, and trousers, even his boots, fit him in a manner that suggested his clothes loved his body. I understood their ardor. Choking down a heavy swallow, I realized my mouth had gone completely dry.

“Permit me to introduce myself,” the man continued, and how his voice matched the rest of his presentation in its majesty. “I am Richard Sandominus Flynn, Minister of Steam-based Research and Technology. The visual stills you are seeing are courtesy of Her Majesty’s Galactyscaphe, Britannia 2, a steam-powered platform presently in orbit around our fair world some one hundred and fifty miles above our heads.”

Gasps sounded around the planetarium. I listened, stunned like my fellow audience members. What the handsome man said challenged the mind.

Still, despite notions of spacecraft launched beyond the world of our origin, I couldn’t break focus with the man who’d sent Britannia 2 on her journey. He now stood beneath a representation of two suns and a fiery red sphere, which seemed to dance about the pair. His voice seduced me. An attraction so strong for him consumed my flesh. Deeper, in what I rarely thought of anymore as soul.

“Our understanding of the world around us—and the worlds beyond—grows daily. It is my belief that within a reasonable expectation of five years’ time we can land similar craft on our nearest neighbors—the moon at first, of course. But then Mars in one direction, Venus in the other. Initially, with exploration teams of mechanical men—robot workers who will pave the way for manned expeditions.”

More gasps followed. Flynn offered the barest of smiles, a measure of pride and one rightly earned. A strange emotion fluttered in my stomach. It could have been at the memory of the time I rode with the Earl of Kensington in Her Majesty’s jeweled airship, Trafalgar, from Heathrow Field to his family’s ancestral estate—the thought of traveling many times higher robbed me of breath and sent a shiver tumbling down my spine. Or it might have been Flynn himself, who seemed to have found me in the audience. His eyes, a vibrant green even given the distance that separated us, greeted mine. Suddenly, I felt as desirable as any of the planets or stars captured by Britannia 2’s cameras.

Flynn’s hairy throat knotted as he swallowed, and my pulse quickened. For the next second or so, our eyes remained locked. In that bottled gaze, I dreamed the minister desired of me a fraction of what I craved of him. Then Flynn blinked and resumed discussing the future of programs like the Britannia project, threatened by politics and enemies of the Steam Workers’ Union. The lightness inside me evaporated, replaced by a miserable weight. He was Richard Sandominus Flynn, who’d sent spacecraft into orbit and would one day launch mechanical men followed by human beings to the stars. I was Donovan Tisdale, a reformed petty criminal from the streets of London who’d once stolen in order to eat. Raised on a healthy diet of creature double features and classic SF television, Gregory L. Norris is a full-time professional writer, with work appearing in numerous short story anthologies, national magazines, novels, the occasional TV episode, and, so far, one produced feature film (Brutal Colors, which debuted on Amazon Prime January 2016). A former feature writer and columnist at Sci Fi, the official magazine of the Sci Fi Channel (before all those ridiculous Ys invaded), he once worked as a screenwriter on two episodes of Paramount’s modern classic, Star Trek: Voyager. Two of his paranormal novels (written under my rom-de-plume, Jo Atkinson) were published by Home Shopping Network as part of their “Escape With Romance” line — the first time HSN has offered novels to their global customer base. He judged the 2012 Lambda Awards in the SF/F/H category. Three times now, his stories have notched Honorable Mentions in Ellen Datlow’s Best-of books. In May 2016, he traveled to Hollywood to accept HM in the Roswell Awards in Short SF Writing.His story “Drowning” appears in the Italian anthology THE BEAUTY OF DEATH 2, alongside tales by none other than Peter Straub and Clive Barker. Follow his literary adventures at www.gregorylnorris.blogspot.com.